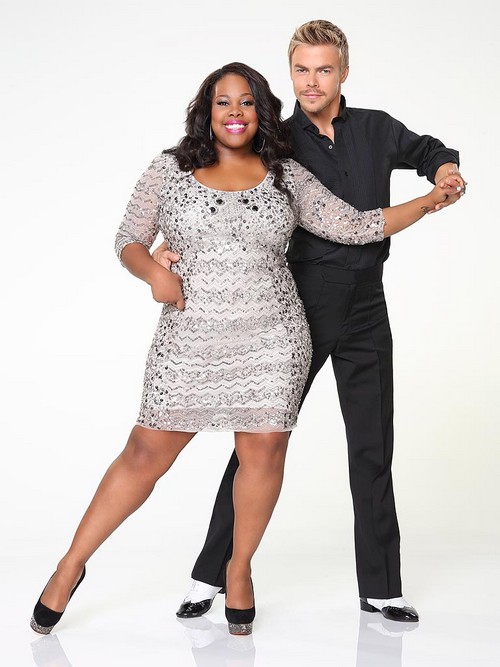 Amber Riley danced a Cha Cha Cha, on the premiere of Dancing with the Stars season 17 tonight.   Glee star Amber had this to say about getting ready to dance.  “The rehearsal schedule is grueling but I’ve been really enjoying the workout aspect of it. It’s four hours a day for six days a week.”  Check out Amber’s DWTS bio [CLICK HERE]  If you missed tonight’s show you can read a full and detailed recap, right here.

Amber Riley and professional dancer Derek Hough: dancing a Cha Cha Cha.  Amber had this to say about her dance tonight, “Gotta get a gnite sleep, tomorrow I am ready to MOVE! This curvy woman is about dance dzown on that floor! Let your haters be motivators!”

Judges comments: Bruno said: “Amber you are the tigress of season 17, that is how you shake it.”  Carrie Ann: “I love you, I love you.  You turned that Cha Cha Cha into a dance.”  Len:  “Week 1 and you come out and dance like that, full on fabulous.”