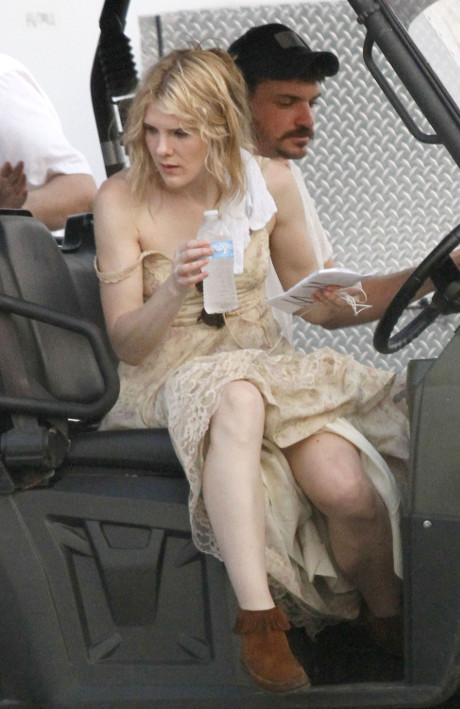 If you’ve been keeping up with American Horror Story: Coven this season then you’re well aware of Misty’s addiction/obsession with Stevie Nicks, both as a person and an artist. Well, according to Ryan Murphy, Stevie will be making Misty’s dreams come true by paying the show a visit with an upcoming guest appearance! Ryan tweeted earlier this morning, “Guess who’s visiting the Coven? The legendary Stevie Nicks!”

Lily Rabe plays the character of Misty, a witch who was burned at the stake but found her way back to the living by employing her magical gift of “resurgence” — that ability to surge life back into things that have died. On last week’s episode (we recapped it for you here), we saw Myrtle Snow — falsely accused by Fiona Goode of harming Cordelia — also burn at the stake. In the final scene, Lily finds her way to Myrtle and, in a moment of intense sympathy, seems to reclaim Myrtle’s soul. While we’re not sure what’ll become of the crispy Myrtle Snow in future episodes, it’s safe to assume she’ll be back with a vengeance.

Not much else has been released about Stevie’s guest appearance on the show, and nobody is sure about the character/role she’ll be playing, but we DO know that Misty will be head over heels. Misty’s made references in the past about how Stevie was the first witch and her lyrics are like spells. While we know she definitely wasn’t the first witch, perhaps Stevie will bring with her a bit of witchiness to keep things interesting.

A month ago, Lily Rabe spoke with Vulture about her character’s obsession with Stevie and confessed that she harbors a similar love.

“Well, I’m pretty obsessed with her, too. It’s been delicious. It’s not that Misty just wants to look like Stevie or listen to her music. She’s quite isolated and lonely, and she has this love affair with Stevie. Stevie is her idol and the lyrics are her mantras that she lives by. She’s looking for someone to help her understand why she is the way she is, so in that way her soul is nourished by Stevie. It’s not a superficial obsession, it’s a deep love. And yes, you will see some shawls.”

Let us know what you think about Stevie’s guest appearance on AHS Coven. Are you excited?