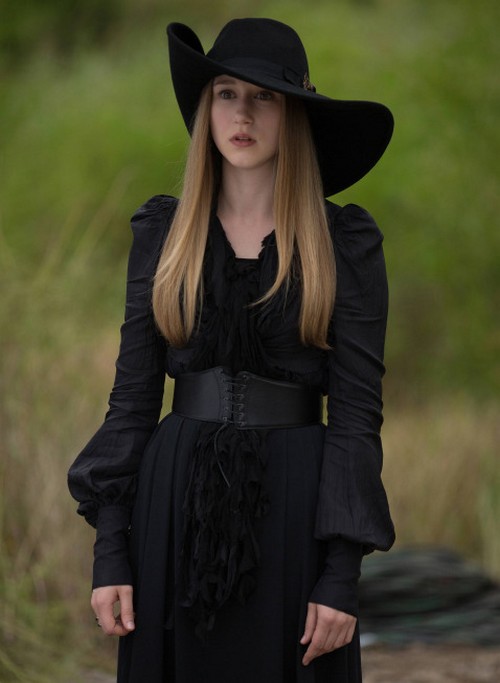 Our favorite creepy drama AMERICAN HORROR STORY continues tonight with another new episode called “Burn, Witch. Burn!” On tonight’s show, Madame LaLaurie is confronted by old ghosts. Did you watch last week’s premiere episode? We did, and we recapped it right here for you!

On last week’s show, Fiona’s choices rattled a decades long truce between the Salem witches and Marie Laveau and the Council of Witchcraft paid a surprise visit to the Academy with disturbing allegations.

On tonight’s show, besieged by Marie Laveau’s army, Zoe unleashes a new power. Fiona and Myrtle clash over control of the Coven. Madame LaLaurie’s daughters can’t bear much more of their terrifying mother… and make the mistake of saying so within earshot.

Tonight’s episode is going to be another spooky one, and you won’t want to miss it. So be sure to tune in for our live coverage of FX’s American Horror Story – tonight at 10PM EST! While you wait for our recap, hit the comments and let us know if you are excited about the season 3 episode 5 of American Horror Story. While you wait for the recap, check out a sneak peek of tonight’s episode below!

The show opens up on 1833, Halloween, in Madame LaLaurie’s mansion. A handsome young man comes to meet one of her daughters, and she instead chooses to show him her “house of horrors.” She asks him to stick his hand in a bowl, which is filled with REAL eyeballs — ones taken from her slaves. She then has him feel a platter of stringy, sausage-like things, which are the intestines of her slaves. She scares away her daughter’s suitor. Her daughters talk about wanting to murder their vile mother.

In the middle of the night, LaLaurie grabs her daughters and throws them in her dungeon.

LaLaurie’s zombie daughters, as well as all the other zombies, descend upon the academy. They’re all trapped inside, unsure of what to do next.

Fiona is in the bar, and Cordelia walks out after being splashed in the eyes with acid. Fiona is clearly distraught, and Cordelia screams in pain. She’s taken to the hospital, where a doctor tells Fiona that her daughter is blind. She was splashed with sulphuric acid.

Meanwhile, the zombies continue to descend upon the school. Zoe, Nan, Queenie, LaLaurie, and the new neighbor try to stop the plague.

Marie is in her lair working her voodoo. She’s controlling her undead army remotely. The zombies, on the lawn, attack poor trick or treaters. Luke, who went out to investigate, is attacked as well. Zoe screams for Spalding, but he doesn’t answer. LaLaurie is about to go outside to her daughters, but Zoe stops her.

Nan goes out to help Luke. Zoe notices Nan’s departure and goes for her. Nan and Luke hide in a car, hoping that will be enough protection. Nan tells Luke that the zombies want them.

Fiona finds herself in a woman’s room. The woman had a stillborn. Fiona hands the woman her dead child and she tells her to keep her daughter close, to tell her that she loves her more than the whole world. Fiona clearly feels an immense sense of guilt for not being a better mother to her own daughter, now lying in a hospital bed. Fiona tells the woman to say, “I’ll be a mother until the day I die.” After those words, Fiona touches the baby’s forehead. The baby comes back to life. OMG SUCH AN AMAZING MOMENT JESSICA LANGE IS THE BEST.

The zombies attack Nan and Luke’s car. They break through the windows. Zoe comes out banging pots and pans. She leads them away from the car, but once they come for her she doesn’t know what to do. She hides in a shed. The zombies pound on the door. Queenie, out of bed, is feeling sick — after having been put through that horrible tragedy with the Bull Man. LaLaurie tells her to get in bed, that she should never have been up, and that she’s her responsibility.

LaLaurie goes down to the kitchen to get ice for Queenie’s fever. One of LaLaurie’s zombie daughters peeks through the window. LaLaurie opens the door to you. “My God, what has she done to ya? No, no, what have I done to ya?” LaLaurie touches her child’s face and, for a brief moment, the zombie seems to be responding to her mother’s sympathies — but then she grabs LaLaurie’s throat and squeezes.

The zombies are almost through to Zoe. Zoe retreats farther into the shed. Upstairs, Queenie wonders where LaLaurie is and things she might be in trouble. Queenie tells Spalding to go check on her. When Spalding leaves the bedroom, he’s thumped on the head by a zombie. One of the zombie comes for Queenie. Queenie slices her throat with a mirror shard, but the zombie doesn’t die.

Delphine comes in and stabs one of her daughters with a fireplace fork. LaLaurie says, “She had a monster for a mother.”

In the car, Luke continues to bleed out. Nan says, “I won’t let you,” and leads him away from the car. The zombie horde approaches them. They’re inches away. Zoe comes in with a chain saw and, like a badass, begins chopping off zombie heads. The chainsaw runs out of gas. A zombie approaches Zoe. Zoe, unsure of what to do, says what sounds like, “Be in your nature.” The zombie immediately falls to the ground, disenchanted.

This display of power forces Marie out of her trance. She’s knocked to the floor.  “I don’t know what that was,” she says, “but whatever it was they’ve got some real power in that witch house now.”

Zoe is stunned and has no idea what it is she’s just done or said.

Back at the hospital, Cordelia’s husband shows up. He gets into it with Fiona. Fiona basically says that she wants him gone, out of Cordelia’s life. When Cordelia’s husband grabs her hand to say, “Baby, I’m here for you,” Cordelia gets a powerful vision: She sees EVERYTHING that her husband did — his affair and his murder that he committed last episode.

The following morning, Fiona helps the girls burn the corpses. She says, “What blows away in the wind need not be explained.”

LaLaurie comes out to watch the bonfire of burning corpses.

The Witch Council returns to judge Fiona Goode. They demand her immediate resignation, but Fiona will not go down without a fight. She won’t give her coven over to the stewardship of The Council, and especially not Myrtle Snow. Fioana says she will never let that happen, especially after what Myrtle Snow “has done.” They don’t know what she’s talking about. Myrtle throws herself out of her seat and says they don’t have to listen to this. But Fiona shouts, “YOU WILL SIT. AND YOU WILL LISTEN.”

Fiona pulls of Myrtle’s glove. Myrtle’s hand has been burned by the same acid that blinded Cordelia. The Council decides to burn Myrtle.

All the witches go to an abandoned rock quarry where they proceed to burn Myrtle, who doesn’t fight it. They tie her to the pyre. Fiona asks her for any last words. Myrtle says, “You’re all just a bunch of toads in her pot boiling away. You won’t even feel it until it’s too late. I’d rather burn than boil!” Fiona tosses her cigarette onto the covered-in-gasoline Myrtle and she goes up in flames.

Zoe looks on in horror.

Queenie comes into see Fiona. Queenie asks Fiona . . . . “Today, did I help you frame a guilty woman or an innocent woman?” We now realize that the burn on Myrtle Snow’s hand was a result of Queenie’s voodoo-doll like powers of self-infliction. Queenie, now distraught, is unable to clear her mind of these guilty thoughts: is she a murderer?

Fiona asks Queenie to sit down. Queenie’s not sure how she can live with this. Fiona says that her mind is already getting stronger, that she could rise to heights that she could not even imagine — why, maybe even to the next Supreme. Queenie likes this idea. Fiona is, of course, manipulating her. She says that she must follow her every move, her every lesson, and all will be well.

Meanwhile, Spalding continues to be weird . . . . he has Madison’s rotting body in a chest.

Meanwhile, at the rock quarry where Myrtle was burned, Misty arrives. She walks over to Myrtle’s singed corpse. She touches her and, using her power of resurgence, pulls her back from death.