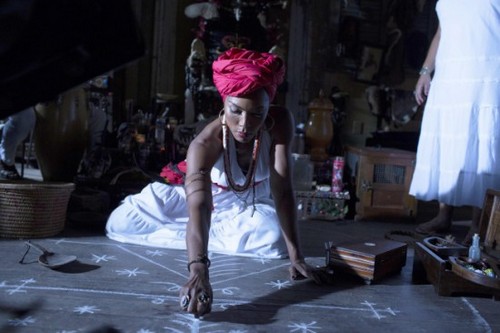 Our favorite creepy drama AMERICAN HORROR STORY continues tonight with another new episode called “Fearful Pranks Ensue.” On tonight’s show, The Council of Witchcraft pays a surprise visit to the Academy. Did you watch last week’s premiere episode? We did, and we recapped it right here for you!

On last week’s show, Fiona took on an unlikely protégé. A guilt-ridden Zoe tried to give Kyle his old life back. Madison had a fiery exchange with Joan Ramsey, a new neighbor.

On tonight’s show, Fiona’s choices rattle a decades long truce between the Salem witches and Marie Laveau and the Council of Witchcraft pays a surprise visit to the Academy with disturbing allegations.

Tonight’s episode is going to be another spooky one, and you won’t want to miss it. So be sure to tune in for our live coverage of FX’s American Horror Story – tonight at 10PM EST! While you wait for our recap, hit the comments and let us know if you are excited about the season 3 episode 4 of American Horror Story. While you wait for the recap, check out a sneak peek of tonight’s episode below!

The show opens with a boy riding his bike down the road. A car follows behind him; the boy notices the car and begins speeding up. The car speeds up, too, nearly catches the bike tire, but the boy takes off down an alley. A group of men get out of the car and chase the small boy down the alleyway. This is a flashback to 1961.

Next, we’re in Marie’s salon. Next, we see a black and white scene; the little boy who was being chased was hung by the white men. Marie is onlooking. Next, Marie is in her layer carrying out a ritual of some sort.

The white men talk about “how good they’d done” and, as Marie continues her ritual, bodies buried in a nearby cemetery come alive and begin killing the men. Marie, the voodoo queen of Louisiana, is orchestrating this vengeance/justice. We’ve finally seen the true reach of Marie’s powers — and she’s definitely not someone Fiona should be messing with.

The Academy’s butler is pouring tea; he’s surrounded by porcelain dolls. He hears a noise and walks down the stairs to investigate. He sees the scene that we saw last week — the moment Fiona cut Madison’s throat. He rolls her up in the carpet. Fiona says she would’ve made a lousy Supreme. The butler walks over and pours Fiona a glass of liquor, and she smiles at him. She calls him Spalding. She says she always enjoyed their little talks — especially since he lost his tongue.

Fiona hears a noise and goes into the greenhouse. Queenie is laying on the floor after being attacked by the Bull Man. Fiona takes Queenie up to Cordelia. She tries to heal her but she stops breathing. Fiona bends over her and breaths a puff of air into her mouth. Immediately, Queenie starts breathing again and has a heartbeat. Cordelia says that they should get her to a hospital but Fiona says that’s the LAST thing they need to do . . . . “The last thing you need is for The Council showing up on your doorstep questioning your competence.”

During this exchange, Cordelia and Fiona both realize that they went to see Marie on separate occasions; Fiona realizes that it was dark voodoo that sent the creature onto their property.

Delphine walks into Fiona’s room and says, “She saved me.” She’s talking about Queenie, who did in fact save her from the creature, despite her constant efforts to discredit Queenie’s humanity. LaLaurie is afraid that it will come back, but Fiona says, “It won’t.”

Marie is in her salon; a mysterious package arrives . . . . she opens it and it’s the head of the bull. It’s still blinking.

Meanwhile, Kyle is banging his bloody head against the bathtub. Zoe comes in and tells him to stop, and then she says she’ll go make him something to eat. She notices some rat poison in the kitchen — and contemplates mixing it in with his lunch. When she returns with the bowl of food, Kyle is nowhere to be found. She runs out of the house. It’s Halloween and everyone is in their costumes.

Fiona is getting dressed, and she says Halloween is her favorite nigh of the year. She dons a witch hat and says, “Who’s the baddest witch in town.”

Cordelia talks with her husband, who’s out of town. After he gets off the phone, a woman comes, with whom he has rough sex.

Queenie wakes up and Madame LaLaurie comes over and says, “I don’t know how I’m going to thank you for saving my life.” Nan comes in and says, “THEY’RE HERE.” Cordelia asks if the girls have finally returned, but Nan says . . . . “Not them.” The Council’s in town.

Cordelia greets them and begins confessing to all the stuff that’s happened, not knowing why exactly they’re visiting. Fiona storms into the room and tells her daughter to stop talking. She greets Myrtle Snow — and tells her that she’s finally developing a sense of style after all those years of nobody paying attention to her. She’s happy to see Quentin, the short man. Pembrook is the third, but she doesn’t receive a warm greeting at all.

Fiona asks what “the hens have come to cluck about.” Myrtle says, “We were summoned.” Fiona doesn’t understand. Who summoned them? Nan walks in and says that she summoned them because she can no longer hear Madison’s thoughts; Nan thinks Madison is dead.

The Council gets their investigation underway; they get bits and pieces, but nobody seems to know much. Cordelia notices that her rug (the one Madison was wrapped up in) is missing. When Council asks if Madison was coming into any new powers recently, Nan says, “Yes. She set a neighbor’s curtain on fire.”

The Council’s intrigued, and they ask who else knew about Madison’s new abilities.

Cordelia’s husband is continuing his affair while out of town. She’s cooking soup. They sit down to eat. We find out that they met in an online community based around Thomas Kinkaid paintings. After she realizes that she might be falling in love with him, he pulls out a gun and shoots her. She’s dead.

The Council begins to question Fiona. Myrtle begins drilling her about how being a Supreme is more that just a figurehead — it’s a responsibility and a privileged position, to help and better the future well being of witches. Myrtle finally suggests that she finds it so curious how Fiona has been associated with the disappearance of two witches . . . . she was the last to see the previous Supreme alive (who she killed) and the last to see Madison alive (who she also killed).

Next, we get a flashback . . . . We see a younger Fiona being questioned by Council members. Fiona acts distraught over the Supreme’s death, but we know it’s all an act. Next, the Council says that Fiona has been named the next Supreme and that she will perform the 7 Wonders to make her induction official. At the celebration party, Myrtle is there, too . . . . and she knows that Fiona is a murderer. Apparently, her powers are tied to protecting “the truth” or something, and we see her working some type of truth spell.

At dinner, Myrtle confesses to her friend that she enchanted Spalding’s tongue to tell the truth. Since Spalding was so close to the witches, surely he’d know what really happened. Later that night, Spalding’s tongue is cut from his body.

Back in present day, Myrtle REALLY wants to prove Fiona guilty and burn her at the stake. She says it’s time to call Spalding up as the last witness. She says all he has to do is write down the name of the witch who killed Madison.

We’re taken back to the past . . . . We see Spalding in the bathroom with the razor. He heard Myrtle talking about that enchantment she placed on his tongue. Fiona comes into the bathroom and says that she got his message to meet. Before Spalding cuts out his own tongue, he says, “These are my last words. I’ve always loved you.”

Back in the present . . . . Myrtle grows FURIOUS. She’s tired of her getting away with so much blood on her hands with no consequence. She says Fiona killed the Supreme before her so she could become the Supreme and that she killed the future Supreme so she could remain powerful.

But now Cordelia chimes in. Cordelia says that Madison wasn’t the next Supreme, that she couldn’t me the next Supreme, because she had a heart murmur. Apparently, a mark of the Supreme is perfect, glowing health — something she did not possess. Fiona is clearly disturbed by this revelation.

As Halloween night grows darker, Marie, alongside her helper, sits in an enchanted chalk circle and begins working her craft. She begins raising the dead.

Nan is convinced that Madison is dead, and she tries telling Zoe and Queenie of this fact, but Zoe is continually optimistic. Meanwhile, Spalding has Madison’s dead body — and he’s treating her like a doll.

Cordelia and Fiona are at a bar for some celebrating — for warding of The Council no doubt. Cordelia is a bit drunk and she wants to play a game of 3 Questions/Honest Answer. She asks Fiona why she doesn’t like Hank, and Fiona says because “he reeks of bullshit and I don’t know why you can’t realize that.” Next, she asks her if she killed Madison, but Fiona, of course, says no. Fiona asks Cordelia who she thinks is the next Supreme, but she doesn’t answer.

Cordelia heads to the bathroom, where she proceeds to throw up. A hooded figure walks in and throws a liquid in her eyes — which clearly burns.

Back at the Academy, the doorbell rings and it’s three zombies. LaLaurie recognizes them as her daughters. Before the episode ends, we see the Academy being overtaken by Marie’s zombies.