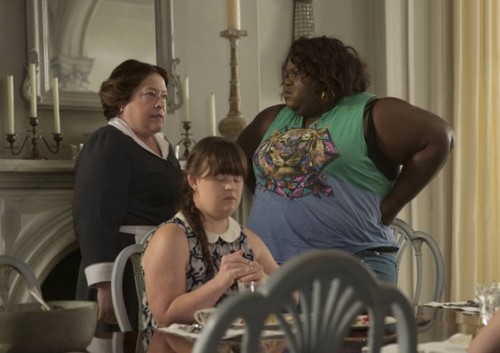 Our favorite creepy drama AMERICAN HORROR STORY continues tonight with another new episode called “The Replacements.”  On tonight’s show, Madison has a fiery exchange with Joan Ramsey, a new neighbor..  Did you watch last week’s premiere episode?  We did, and we recapped it right here for you!

On last week’s show, Fiona helped Zoe and Madison deal with a horrible tragedy. Delphine LaLaurie struggled to adjust to modern life and Cordelia was forced to contemplate a dark decision regarding her family.

On tonight’s show Fiona takes on an unlikely protégé. A guilt-ridden Zoe tries to give Kyle his old life back. Madison has a fiery exchange with Joan Ramsey, a new neighbor.

Tonight’s episode is going to be another spooky one, and you won’t want to miss it. So be sure to tune in for our live coverage of FX’s American Horror Story – tonight at 10PM EST! While you wait for our recap, hit the comments and let us know if you are excited about the season 3 episode 3 of American Horror Story. While you wait for the recap, check out a sneak peek of tonight’s episode below!

The show opens in a dark room. There’s soft music playing and Fiona is wrestling around in bed; she reaches for some presciption meds, gets up, and goes to her liquor cabinet downstairs. She pours herself a drink.

We enter a flashback to 1971. Fiona is young and talking to her mother about Witch Supremacy. Fiona wants to know when her mother first knew she was the Supreme, when did she “feel it” in her “bones.” The Supreme says that one is a Supreme only when a young witch masters the seven wonders — after they have “bloomed” into womanhood. Fionas says that she’s ready to take over the Supremacy now, but her mother disagrees. They have a fight, and Fiona’s mother says that she’ll make it her mission to make sure she never takes the throne — because she’s “seen” the ruin she’ll bring this coven. But before she can do anything, Fiona cuts her throat.

In walks the butler, who saw the whole thing. In the present day, we see Fiona staring at the portrait of her mother, and in walks the same butler, the one without a tongue. She asks, “What’s the matter? Cat got your tongue?” I assume she cut out his tongue as a punishment for what he witnessed.

Fiona is sitting at the bar and contemplating her both her mortality, age, and failing youth. Next, we see her visiting a plastic surgeon.

Zoe is visiting Kyle’s mother, and she continues to express her guilt and sympathies for this horrible loss. His mother asks if she can share something with her. Zoe says of course. She confesses that she was about to hang herself, but that Zoe’s phone call interrupted her suicide and ultimately saved her life.

Near the witch mansion, a young man takes off his shirt, and Queenie, Nan, and Madison observe their new neighbor. The neighbor’s mother comes out and tells him to “put his shirt back on to protect his modesty” (okay, weird haha). She notices the witches staring down at them and tells her son to get immediately back in the house.

LaLaurie is watching the TV and President Obama is on; she’s distraught over the fact that he’s the President of the United States. Fiona comes back in and says that she’s got a lot to learn about this new world, and Fiona then informs LaLaurie that she’s the school’s new maid.

LaLaurie comes in to serve the girls food, and she goes off on Queenie because she’s black. Fiona comes in and asks what’s going on. Fiona says, “There’s nothing I hate more than a racist” and then says that Delphine LaLaurie will serve as Queenie’s personal servant.

Misty, who’s gifted with the power of resurgence, continues to nurse Kyle back to health — from his state of zombie-ness and all-around-deadness. They rest in the bed and listen to music. Zoe comes to visit. Misty is so happy to see her. Misty shows Zoe the healing work she did on Kyle. He looks better. Zoe wants to take him away, and Misty is clearly attached to him in more ways than one. She cries as he begins to leave and says that they’re connected. Zoe eventually takes him away. She says that she’ll come back for Misty, but then Misty, as she’s left alone in her swamp cabin, mutters, “No you won’t.” She twirls and twirls and twirls.

Nan and Madison take a cake over to the new neighbors. The young man answers the door and introduces himself as Luke. Luke’s mother comes in and says that they’re late for church and that they best be going. Luke says they have Bible study, and Madison says, “You know that’s all just a crock of shit, right?” She grabs the knife. Luke’s mother grabs Madison’s wrist and the knife flies against the wall. As Madison and Nan walk out of the house, Madison sets the curtains on fire, an ability she didn’t know she had.

Meanwhile, Cordelia and Fiona are getting news from their doctors. Cordelia’s doctor says there’s no way for her to have a baby and Fiona’s doctor says her blood work came back and that there’s no possible way she can undergo elective surgery — as her immune system seems to be in some form of free fall.

Zoe drops Kyle off at his mom’s house in his zombie-like state. She’s ecstatic but also terrified.

Fiona is playing with her pills on the table and drinking them with liquor. The butler brings in Luke’s mother, Joan. She hands Fiona a Bible. Fiona offers her a drink, but she denies her invitation. Joan says that, somehow, the scandalously dressed one lit her curtains on fire. Fiona suspects that Madison might be coming into more powers than she wants — that maybe, possibly, she’s the next-in-line Supreme, which is deeply threatening to Fiona.

Kyle’s mother comes into his room. She says she can’t believe he’s really here. She wonders about his body — why does he look like someone else? It sort of disturbs her, but she says it doesn’t matter, and begins to kiss him quite passionately on the lips. Then she begins to caress his body. “Let it all go,” she says. “Let it all go.” There’s a pain on his face, but he can’t do much more than lay there, still and morose.

Cordelia walks into Marie’s hair salon. She enters, and she says that she’s here to consult with her about an fertility problem. Cordelia enters Marie’s lair. She wants a spell to help her conceive. Marie says there’s nothing she can do, but Cordelia says that she knows there’s a way. Marie agrees to carry out the spell, and soon we see Cordelia enter a ritual ceremony that is painful and macabre.

But then we see it was all just a vision, and Marie begins laughing, saying there’s no way she’ll perform such a drastic spell on the daughter of her sworn enemy. Marie then tells Cordelia about how Fiona came barging into her place, talking about “hammers and nails.” Cordelia didn’t know anything about this, and she’s distraught, because Marie is her only shot at conceiving. Marie says, “She done gone and messed with the wrong witch, and she knows it.”

Zoe enters the school. Nan says, “You like him!” Nan can hear people’s thoughts, and she says that she wishes she could stop. Zoe gets a call from Kyle’s mom, who tells her that Kyle’s come back — but she also says that he’s not the same.

Meanwhile, Madison and Fiona are having lunch. Fiona asks if she always knew she was special. Fiona says that she has so much to give, so much more to teach . . . . and then Madison says, “Teach me.”

Delphine is making a chicken pot pie for Queenie. LaLaurie thinks there’s something outside. They are being attacked by the minotaur thing — her houseboy that was enchanted by Marie after LaLaurie killed him and forced him to wear the head of a bull.

Delphine begs Queenie to save her. Queenie says that she’ll take care of everything. She takes a bit of Delphine’s blood and opens the door blocking the minotaur. She walks outside into the night. Nothing is there. Yet. There’s a growling. She walks farther into the night. Soon, the bull’s face appears.

She’s leading the creature away from the house. Queenie has a special moment with the creature and says, “All you wanted was love, so why does that make you a beast.” She says that she’s been called a beast too. “Don’t you wanna love me?” she says. She begins rubbing herself and the creature proceeds toward her, caressing her face, but then he pushes his hand over her mouth.

Meanwhile, Kyle is rocking back and forth, still confused after being ripped back into the living. Kyle’s mom says that she has a surprise for him, that she invited Zoe to dinner. Kyle’s mom talks about how she knows this isn’t her son. She then proceeds to tell him that she knows how to make him happy. Kyle loses it and, because of his mother’s sexual abuse, beats her with a trophy.

Fiona and Madison shoot billiards at the bar. Fiona sees herself in Madison — a power hungry, self absorbed witch who’ll do anything to be great and noticed. In other words, Madison is a gigantic threat to Fiona. Fiona gets Madison drunk while she remains sober. Who knows what she’s going to do.

Zoe arrives at Kyle’s house. She knocks on the door and it swings open. She walks through the house but she doesn’t see anyone there. She calls for Kyle’s mom, but she doesn’t answer. Zoe walks into Kyle’s room and sees his mother beaten and bloodied to death. Kyle is there, covered with blood.

Madison and Fiona return to the house. They talk about portraits and where each of there’s will be hung. Madison says that she probably will never graduate this shit show. But Fiona says of course she will  . . . . because she’s the next Supreme. Fiona says that her life force is literally pouring out of her body and into Madison’s. Fiona goes off on a speech, discussing how she squandered her powers and merely “dressed it up in Chanel.” She reminisces about how she killed her mentor. Fiona hands Madison the blade and tells her to cut her throat. Madison screams and shouts, saying that she doesn’t want to kill Fiona. They fight for a bit longer, and then Fiona slits Madison’s throat.

Madison bleeds out. At first, Fiona’s face might make it look like it was all an accident, but we know differently.

Before the episode ends, Fiona says, “This coven doesn’t need a new Supreme. It needs a new rug.”