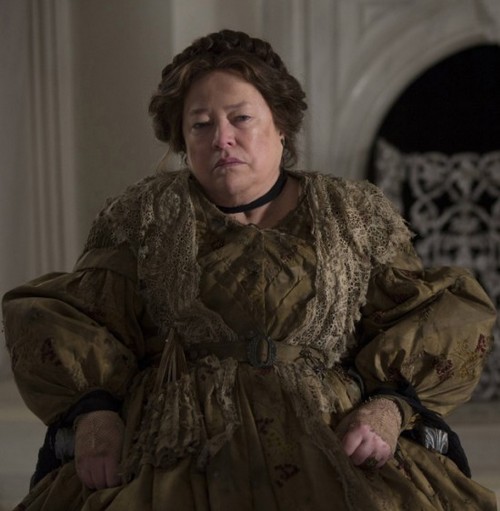 Our favorite creepy drama AMERICAN HORROR STORY continues tonight with another new episode called “Boy Parts.”  On tonight’s show, Cordelia faces a dark decision about her family.  Did you watch last week’s premiere episode?  We did, and we recapped it right here for you!

On last week’s show, a young girl, Zoe, was shattered to discover she possessed a strange genetic affliction tracing back to the dark days of Salem. Zoe was whisked away to Miss Robichaux’s Academy for Exceptional Young Ladies, a mysterious school in New Orleans devoted to safeguarding the few remaining descendants who share this unique bloodline — one of witchcraft!

Tonight, Fiona helps Zoe and Madison deal with a horrible tragedy. Delphine LaLaurie struggles to adjust to modern life and Cordelia will be forced to contemplate a dark decision regarding her family.

Tonight’s episode is going to be another spooky one, and you won’t want to miss it. So be sure to tune in for our live coverage of FX’s American Horror Story – tonight at 10PM EST! While you wait for our recap, hit the comments and let us know if you are excited about the season 3 episode 2 of American Horror Story. While you wait for the recap, check out a sneak peek of tonight’s episode below!

The show opens up in a swamp; there’s an alligator and some people hunting it. The hunters shoot the alligator; they get out of their boat and see a young lady — it’s Misty, the girl who supposedly died last episode. She’s a witch with the ability to awaken the dead, and she brings the alligators back to life. They eat the hunters who killed them.

Cordelia knocks on the ladies’ doors, telilng them it’s time for morning gathering. Zoe continues to mourn the loss of Kyle — the frat boy who died in the bus crash.

Cordelia knocks on her mother’s door to see if she wants to come down for morning gathering. Meanwhile, Fiona has Madame LaLaurie tied to a chair. Fiona wants to know how LaLaurie’s managed to stay alive so long.

At the morning gathering, Queenie tells how she came to be at the special school. How she was found.

Detectives show up at the school to question the girls about the bus crash. Zoe has a break down and tells them everything, that they’re witches. Fiona walks in and manages to do some black magic to dissuade them to forget everything they have on the girls.

Fiona comes in and tells them that they’re emotional and “soft.” She says that they need to find the brains if they’re to survive but, before she leaves the room, she says, “The only thing you have to fear in this wicked world is me.”

Madison and Zoe drive up to the morgue; Madison picks the lock and they gain access. They turn on the lights. Madison says she’s going to pay her back because she knows what she did for her–she killed that boy who raped her. They uncover the body bag filled with Kyle’s parts. She suggests that they “build the perfect boy” and resurrect Kyle.

Cordelia is at the doctor’s office. She wants to get pregnant, but she’s struggling. She and her husband talk. He asks her why she doesn’t just use magic to conceive — but she doesn’t want to delve into that kind of magic, the kind that deals with life and death. Dark magic.

Fiona goes into speak with Madame LaLaurie and tells her she was beneath the surface for 180 years. Madame LaLaurie tells her how she was tricked by Marie. In a flashback, we see that Marie killed her family in revenge for all the torture she brought upon her friends and families. Marie says that she gave her a fate worse than the suffering her family incurred: life everlasting. And then they through her in a coffin and stuck her in the ground.

Meanwhile, Madison and Zoe continue to stitch together their “perfect” boyfriend. They carry out the spell. It seems to have not worked. Madison leaves, but Zoe stays behind to talk with Kyle. Someone in another car pulls up and Madison, always looking out for herself, drives away. Zoe bends down to kiss Kyle.

A man walks into the morgue and sees Kyle’s mangled body. But Kyle awakens and manages to kill him.

Meanwhile, Misty is out and about.

Fiona is sitting in the chair getting her hair done. The hairstylists are having a good time, but then Marie walks in and says, “You all go on home now; I’ll finish this one myself.”

Nan is reading in a chair. She’s hearing voices and she talks to herself. She heads up stairs and frees LaLaurie.

Fiona and Marie have an intense conversation about the origins of witchcraft and voodoo. Eventually, Fiona says that she wants what she has: the thing that’s kept her young all these years.

Cordelia is picking herbs, perhaps for a potion to help her conceive. But that’s not exactly what they’re doing. They set up a circle of black magic. She places eggs around them and as they go at it, the circle bursts into flames and the serpent eggs crack.

Meanwhile, Zoe has Kyle in the car. He’s not handling the transition well. They’re driving, Zoe’s trying to talk, and she’s startled by Misty — who pops up in the back seat.

Back at the swamp, Misty is helping Zoe and Kyle. Zoe says that she needs to leave. Misty offers to let Kyle stay with her; she’ll heal him.