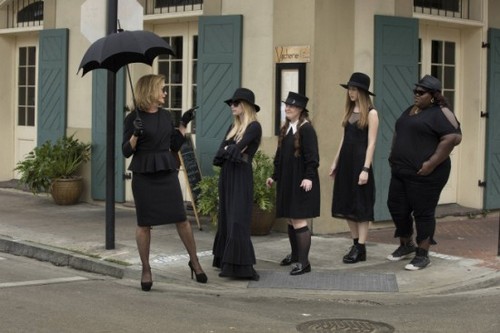 Our favorite creepy drama AMERICAN HORROR STORY premieres tonight with its 3rd season.  Season 3, officially titled American Horror Story: Coven, called, “Bitchcraft.”  On tonight’s show, Fiona Goode, the most powerful witch of their generation, returns to town, reigniting old rivalries with the Coven’s deadly enemies, those who prescribe to the followings and teachings of Voodoo.  Did you watch last season’s finale?  We did! If you want to get caught up before tonight’s episode, we have a full and detailed recap right here.

On tonight’s show, a young girl, Zoe, is shattered to discover she possesses a strange genetic affliction tracing back to the dark days of Salem. Zoe is whisked away to Miss Robichaux’s Academy for Exceptional Young Ladies, a mysterious school in New Orleans devoted to safeguarding the few remaining descendants who share this unique bloodline.

Tonight’s episode is going to be another spooky one, and you won’t want to miss it. So be sure to tune in for our live coverage of FX’s American Horror Story – tonight at 10PM EST! While you wait for our recap, hit the comments and let us know if you are excited about the season 3 premiere of American Horror Story. While you wait for the recap, check out a sneak peek of tonight’s episode below!

We open up with a party scene, New Orleans 1834. Kathy Bate’s character, Marie, is there, and she’s talking about her many daughters. In the next scene, we see Marie brushing her face with blood. Her butler comes in and says there was a problem at the dinner party, which was a party to introduce one of her daughters to many eligible bachelors. One of her daughters was caught having sex with their black servant. She says she won’t have this and she takes him down to a basement room; there, she has a dungeon full of slaves, all being housed and treated in brutal fashions. She chains the servant who was caught with her daughter, and she places a severed bull’s head on him. Wow, she IS CRAZY

Zoe Benson (Taissa Farmiga) and a boy enter a house; they’re planning on hooking up. They enter the bedroom; the boy says, “I don’t want to hurt you–it hurts at first,” but Zoe says everything will be all right. As they begin to kiss and touch, the boy gets a nosebleed and then violently starts to shake.

Next, we see Zoe on a train. As she stairs out the window, she reminisces about what happened. The doctors said the boy technically died of a brain aneurysm, but her mother reveals that she has a “genetic disorder” that she prayed would skip her . . . . but it didn’t, and it’s revealed that she’s a witch. She’s being sent to a school in New Orleans, where hopefully she’ll be safer.

Myrtle Snow (Frances Conroy) comes to pick her up from her mother’s house; her mother is sad to see her go, but Myrtle says, “She’s our daughter now.”

Zoe arrives at the school in New Orleans. They ring the doorbell. As they do, a giant gate slowly opens. Zoe enters the estate, a glorious white mansion with a Southern Gothic aesthetic. She walks into the house. Inside, decorated plainly and simply, is empty. She walks in and surveys the room. There are countless portraits hanging on the wall. Figures in bird masks dart around her; she screams. They chase her and pin her down on the table.

They jump on her and are about to stab her with a knife, but then they jump off and start laughing. They take off their bird masks and reveal themselves: Queenie, Madison Montgomery, and Nan. Next, Cordelia Foxx enters, and she announces herself as Headmistress.

Cordelia tells Zoe about the history of the academy, and how it was ultimately founded to hide and protect young witches. She says witches are a dying breed because many families who knew they carried the Witch Gene stopped reproducing. She also tells her about the Supreme — which is a witch born every generation that supposedly embodies all the powers, not just a few, like the witches at the school.

Cordelia tells a story of Misty Day, who realized she could bring things back to life. She said that Misty wasn’t found by their care in time, and she was burned out of fear.

A car arrives in the rain, and out walks someone covered by an umbrella.

Fiona Goode is talking with a doctor, a researcher, who seems to be working on some sort of “vitality” drug. She says she wants an “infusion of youth” and she wants it now. But he says he can’t give it to her, “what they do here isn’t magic.”

Next, we see Fiona snorting coke and listening to the news. On the news, she sees the story about Misty Day being burned at the stake. The doctor arrives, and she’s livid. She says, “You’ve been injecting me for five days now and nothing’s happening!” She gets furious and wants the drugs to work. The doctor says he’s risked everything and won’t do anything more. He tries to leave, but Fiona throws him against the wall with her magic and sucks away his soul — she looks in the mirror and, for a brief moment, she appears youthful. But then her age returns.

It’s quite clear that Fiona’s motivation this season will be her relentless desire to achieve youth — perhaps immortality?

Madison, Nan, Queenie, and Zoe are eating dinner. Madison asks what Zoe is “in for.” She’s reluctant to elaborate. At the table, the girls’ powers are revealed. Madison is a telekinetic, Nan is a clairvoyant, and Queenie appears to be a human voodoo doll — she stabs herself with a fork, after Madison gets too big for her britches, and Madison also experiences the wound.

Cordelia is brewing a potion. Fiona startles her and Cordelia drops the bottle. Fiona says that she was her biggest disappointment, as Cordelia is the daughter of a Supreme. The mother-daughter relationship is a bit ambiguous, though it seems Cordelia is Fiona’s daughter. They argue about how the school should be run. Fiona thinks these girls should learn how to protect themselves, truly learn about their powers, as a storm is brewing — Misty Day’s recent murder is evidence of an impending prosecution. The Salem Witch Trials all over again.

She says we can’t hide in the shadows anymore — there aren’t any more shadows, not in this digital age. Cordelia says that she needs to leave, or she’ll call the council. Fiona says, “Fine. Do it. And try to dissuade them that a Supreme teaching them is a bad idea.”

So Fiona is a Supreme witch, and she says she’s HERE TO STAY.

Kyle Spencer (Evan Peters) is on a party bus and chatting with his frat brothers.  They enter a party, raging and dancing. Madison and Zoe arrive at the party. Kyle instantly has eyes for Zoe, who seems lost and not comfortable in this chaotic situation. Zoe and Kyle stare at each other through an ice sculpture; they find themselves in a type of trance. They smile back and forth at each other and, as she walks away, he soon follows.

“I thought you looked thirsty,” Kyle says, handing her a drink. “Is that your superpower? To sense dehydration?”

Madison is in a staircase; she goes to have a smoke. A frat boy walks up to her. She says, “Wanna be my slave tonight?” He says, “What’s in it for me?” She returns, “Don’t you know anything? Slaves don’t get anything?”

He leaves to go get her a drink, but slips a roofie in it.

Meanwhile, Zoe and Kyle are talking. She wonders where Madison is. Madison, having been roofied, is being raped by the fratboys. Kyle goes to look for them; he breaks it up. It turns out they were filming it. Zoe runs into help her. The fratboys run out of the house. Kyle tries to make things right, but his friend punches him in the face, and they drive away in their party bus.

Madison comes to. She stares at the bus, driving away. She waves her hand and the entire bus flips over and crashes.