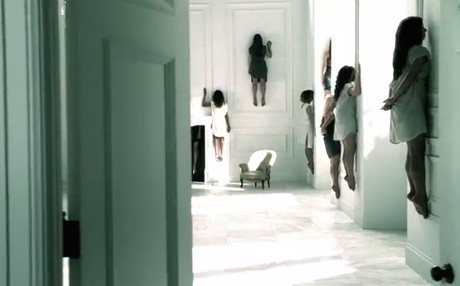 American Horror Story season 3, officially titled American Horror Story: Coven, will be arriving (quite creepily, we might add) in October. Simply put, we can’t wait to see how this creepy show deals with one of the most alluring elements in the supernatural genre: magic. The show will be grounded in New Orleans and, as the title suggests, will center around a coven of witches that’ll undoubtedly take outrageous journeys into the unexplainable and macabre.

If you watch all six trailers, which we’ve provided for you below, you’ll notice the way the show has chosen to present magic is both subtle and bone-chillingly creepy. Many of the the clips feature girls simply floating — which doesn’t seem too extravagant a feat if you take into consideration all the avenues one can journey down with magic at his or her disposal. But the mystical imagery — coupled with the almost pristine and sleek backdrops, heightened by the music — definitely gets our magic-loving brains wondering . . . . What’ll the show throw at us this season? I expect the magic to feel very real and believable in this show, which is always the hardest to pull off in fictional realms. But if any show can do it, well, it’s this one.

In statements made by FX, we learn that many of the events will occur at a school working to educate young girls in the magical crafts. The season’s narrative, completely separate from the previous two seasons, will focus on the “history of witchcraft in America.”

“Over 300 years have passed since the turbulent days of the Salem witch trials and those who managed to escape are now facing extinction. Mysterious attacks have been escalating against their kind and young girls are being sent away to a special school in New Orleans to learn how to protect themselves.”

One thing I love about this series is its incredible use and attention to physical spaces, which quickly become characters. It will be wonderful to see how this school/place, made magical by the wonderful acting of Jessica Lange and new main cast members, becomes an entity to send shivers down our backs.

The premiere is October 9 at 10 p.m. on FX. Watch all six American Horror Story: Coven trailers — in order! — below.