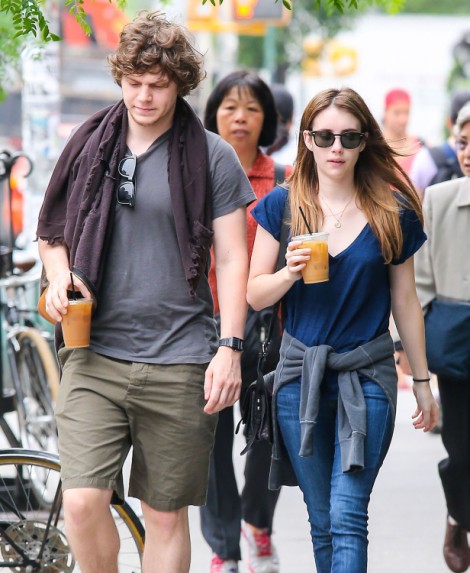 Should the rest of the title be… “While Her Aunt Helps Her Score Roles On Everything Else”? Oh, stop! I’m just kidding. I actually don’t mind Emma Roberts. She’s managed to maintain a somewhat healthy head on her shoulders while growing up in Hollywood with famous relatives. And ever since she started hooking up with Evan Peters I’ve taken a shine to her even more. Who isn’t in love with adorable Evan right now? He’s super cute and I actually look forward to getting new pics of the Evan Peters/Emma Roberts romance when I can which is why I posted the new ones of them today. And then the news dropped that she was joining Season 3 Coven: American Horror Story. Emma Roberts may have used her boyfriend to get the part but wouldn’t you if you could?

It also doesn’t hurt that story creator, Ryan Murphy, worked with aunt Julia Roberts in Eat, Pray, Love and will be directing her in his adaptation of The Normal Heart for HBO. Suffice it to say Emma didn’t get this role strictly on her acting skills but I’m over it. Jessica Lange aside, American Horror Story isn’t exactly known for its stellar acting anyway.

Emma will join Jessica Lange, Kathy Bates, Angela Bassett, Patti Lupone, Taissa Farmiga, Gabourey Sidibe, Sarah Paulson, Lily Rabe, and Frances Conroy in this new season. Who else is stoked Kathy Bates is coming aboard? I hope she goes head to head with Lange. That would be amazing. And anyone else excited to see Taissa Farmiga come back? She was so great in Season 1. I was surprised she didn’t sign on for 2. Yes, 2 kinda sucked but I watched anyway. It totally grossed me out. I told myself not to watch anymore. It was truly a horror show but I kept at it! I don’t know how Ryan Murphy did it to me! And now he’s adding witches which presumably will come out this coming fall… I’m hooked already. I’ll watch anything with witches in between the months of August to November.