Miley Cyrus To Emma Roberts: “Hands Off My Man” 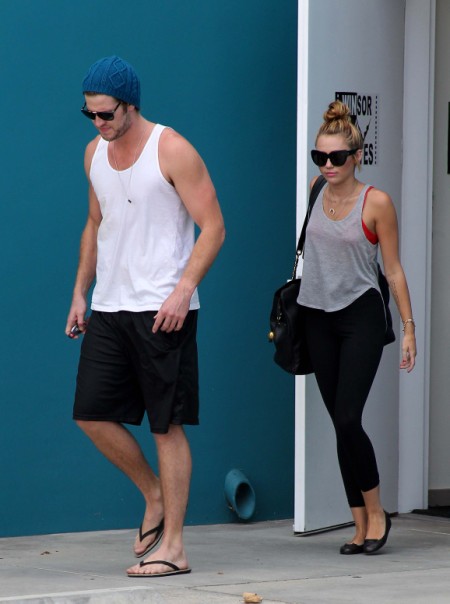 Miley Cyrus thinks every girl that co-stars with Liam Hemsworth wants to steal him away. First it was the Hunger Games’ star, Jennifer Lawrence, and now the honors go to Emma Roberts. Miley got all freaked out and possessive when Emma reportedly came to the Empire State set and told everyone she was “single and ready to mingle.”

“Miley’s become super-protective since she and Liam got engaged,” an insider told the National Enquirer. “She’s worried that while he’s off making movies with hot women, he’ll be tempted to cheat.”

Miley really has no self-confidence does she? I’m telling you, girls that spend all that time tweeting pictures of themselves with their dogs and wearing minimal, questionable clothing are not as confident as they make themselves out to be. And I don’t even need to mention the alleged cutting scars.

Miley was psyching herself out so much she made an ass out of herself on the set. She needs a job so badly. She shouldn’t be hanging out there to begin with.

“Miley doesn’t want Liam socializing with a loose cannon like Emma,” the in­sider divulged. “She thinks the girl is bad news. Not only did she tell Liam it had to stop, she even confront­ed Emma, reminding her that Liam is off the market. Miley more or less said, ‘Hands off my man!’”

“She couldn’t care less what Miley thinks,” added the source.

“She makes fun of Miley behind her back, saying she’s just a washed-up tween star. Emma feels she has nothing to lose, so she’s pushing it as far as she can with Liam. And he’s definitely enjoying the attention.”

I heard Emma’s dating American Horror Story actor, Evan Peters. But she always has this mean girl vibe to her. I wonder if it’s because she’s Julia Roberts’ niece – apple doesn’t fall far from the tree and all that jazz. Regardless, I would mess with Miley’s head too if I were her. It’s probably way too easy and way too fun. Miley’s self-conscious as all hell about Liam’s rising career. I bet tons of girls are throwing themselves at him. But you got the ring, honey. Chill out. No dude likes a jealous wife. If she wants that relationship to last she better cool her jets and gain some trust. We can only take one Jessica Biel at a time.