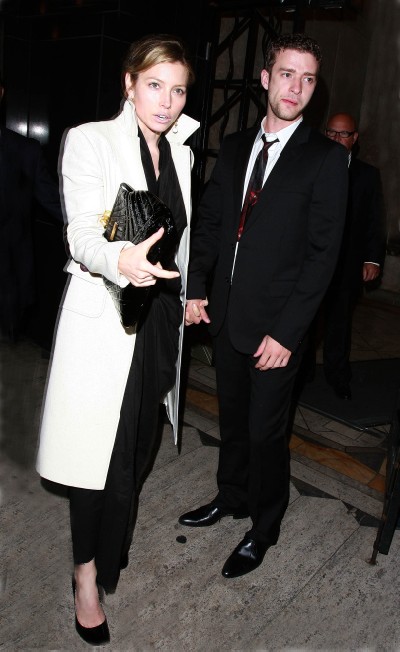 Jessica Biel and Justin Timberlake’s engagement is on rocky ground amid rumors Jess flew to the set of Justin’s new movie to keep him from cheating on her yet again. Apparently, Jessica heard Justin’s taken quite a liking to his Runner, Runner co-star, Gemma Arterton, and rushed down to Puerto Rico to keep him honest.

“Justin is a charmer who can’t help but attract stunning girls. While Jessica thinks he’ll behave himself, she finds it hard to trust other women with him,” a source told the National Enquirer. “Gemma is a brunette, and Jessica knows she’s Justin’s type. She told Justin that she was joining him because she hates being away from him, and that’s true. But deep down she also feels that she needs to keep tabs on him before their big day. She doesn’t want her dream wedding ruined!”

If Jessica hops in a plane every time she hears Justin’s cheating on her she must have crazy points. It’s always the people who have all the points that don’t need them! I’m not surprised by this story. Are you? Justin’s hands have been caught in the cookie jar a few times, most notably with Mila Kunis and Scarlett Johansson – both co-stars. Why would he stop now? A ring doesn’t stop a man from cheating but it may stop an overeager girl like Jessica from spying too hard. Obviously it didn’t in this case but how many other times has she looked the other way? Is this why Jessica can’t seem to keep that rock on her finger? I’m telling you, a woman’s subconscious knows what her heart doesn’t want to tell her. He’s cheating. And I’m not sure what’s worse – Justin’s continual betrayals or the fact that Jessica thinks she can c-ck block him just by showing up. It’s a little sad. Actually, it’s a lot sad. She hears he’s cheating, and instead of breaking up or calling him out, she babysits so he behaves. Is she ever going to hold him accountable for his actions? When did dream weddings become more important than honest relationships?