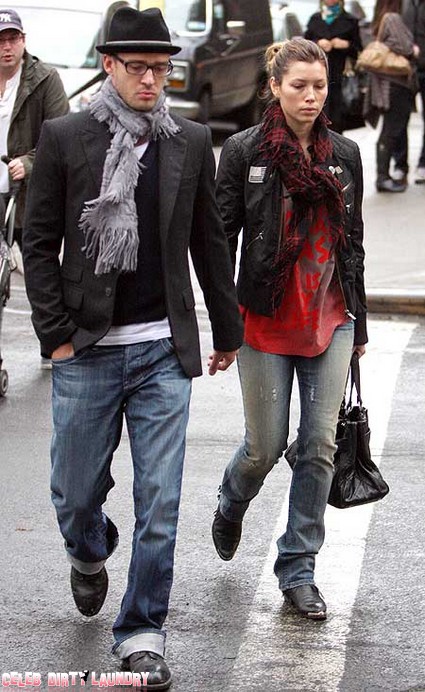 There’s one celebrity marriage I’ll be very surprised to see happen  – Jessica Biel and Justin Timberlake. Sure they’re engaged…but it’s been a rocky road for these two and it’s not over yet. They’re now at loggerheads over their marriage prenup. The sticking points are fidelity and starting a family. If they can’t get it sorted the twosome could be headed for splitsville.

Problems are nothing new for the star couple. JT and JB have had plenty of break ups and make ups along the way. Her engagement ring even sparked problems. Celeb Dirty Laundry covered the incident here Bridezilla Jessica Biel To Justin Timberlake : This Engagement Ring’s Not Going To Cut It

Now the whole wedding and happily ever after is in jeopardy because Jess is worried about Mr Sexyback’s roving eye. An insider has told Star magazine ‘She thinks if he strays during the marriage, she should be royally compensated. She wants a fidelity clause in the prenup giving her at least $500,000 if he does‘. So what does Justin say to that? He’s offering a cash settlement with no fidelity clause or alimony. But that’s not good enough for Jess.

Having a brood of Timberlakettes is also a sticking point. The actress is not rushing into motherhood. The insider says ‘If he’s faithful for several years, maybe she’ll agree to have his baby. She doesn’t trust him 100 percent yet. Jessica figures if she gets fat during the pregnancy, he’ll cheat again.’

So it could be a while before these two tie the knot. If ever. There’s not a lot of trust in this relationship. Is there enough to exchange wedding rings?