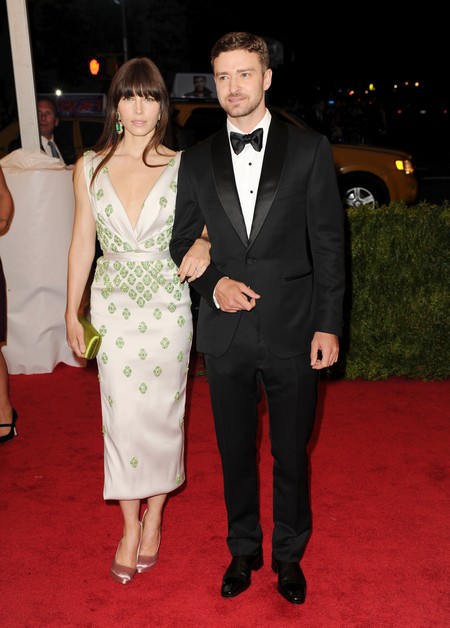 Jessica Biel is heading for heartbreak as she has caught Justin Timberlake cheating again.   Justin and Jessica were in NYC to attend the Fashion Oscars May 7.  This appearance at The Gala at the Metropolitan Museum of Art was their first red carpet together since Christmas.

But a source reveals that the NYC trip went seriously awry: “they went to a Manhattan hotspot together, and Jessica left after one drink, while Justin stay behind to make a night of it in the VIP section.”

“It wasn’t long before he was joined by a group of partiers that included pro athletes and a handful of gorgeous women, who showered Justin with attention. I don’t think he was in any hurry to get back to his fiancée.”

It seems that Jessica was none too pleased with Justin’s signature fooling around and went home to Los Angeles without the snake!

Justin had to hustle home and put the lip smackdown on Jessica to get her back in his good graces.  According to the source this is how Justin rolls: “but that’s his typical modus operandi,” the friend tells Star. “Justin will do his own thing, then work his way back into her heart by playing on her insecurities.“

The loudest cheer of the night during the May 12 NBA playoff game between the Los Angeles Lakers and Denver Nuggets at LA’s Staples Center wasn’t for the on court action but for the courtside embrace of Justin Timberlake and fiancé Jessica Biel. Caught by the venues fabled kiss-Cam and shown on the giant overhead scoreboard, the beaming couple kissed deeply and passionately as the crowd went wild.

But just days before, Star has learned exclusively that Justin was enjoying the company of a number of young women during a late-night at an NYC nightclub-without Jessica. It was the latest incident, sources claim, in Justin’s long pattern of cheating on Jessica during their five-year relationship. And it raises the question of whether she’s been turning a blind eye to his wandering eye.

“Jessica likes to pretend that there’s nothing wrong with their relationship,” a friend tells Star. “She only wants to see the Justin she loves – not the one who seems so cavalier about partying with other hot women behind her back.”

Given Justin’s latest flirtation and his reported history of cheating pals are worried that Jessica will have her romantic dreams shattered long before he ever actually go through with the wedding.

“No one wants to see Jessica hurt, but she’s going to get her heart broken if Justin doesn’t change,” says the friend, “it seems he still wants to so his wild oats-and she should wake up to that fact.”

Is Justin anywhere near ready for marriage?  Why does Jessica insist on playing with fire?  Even if they do manage to get married how long will it be before Jessica catches Justin cheating again?  Let us know your opinion in the comments below.