Jessica Biel’s Subconscious Telling Her Not To Marry Justin Timberlake 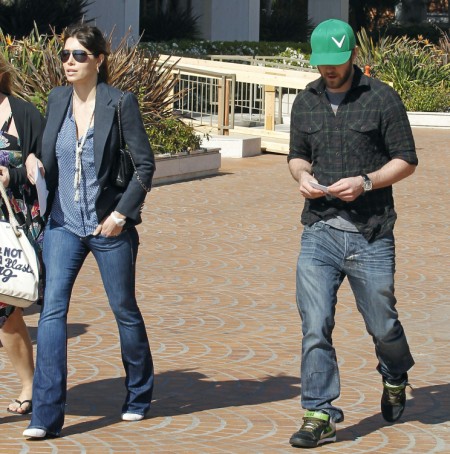 Jessica Biel may have begged and groveled and continually turned a blind eye to Justin Timberlake’s cheating for four years to get that rock on her ring finger, but now that she has it, she’s finding she can’t ever seem to keep it on.

The National Enquirer reports that ever since Jessica and Justin’s engagement, she’s been having a hard time keeping tabs on the sparkler and has already suffered several near losses. Is her subconscious trying to tell her something? We all thought Justin would be the one to get the cold feet, but could Jessica finally be opening up to the fact that Justin may not be the Casanova catch she thinks he is?

Jessica had enjoyed a playful hour cavorting with her pups at the park, then drove off – only to return in a panic minutes later, begging fellow dog owners to help find her lost bling.

After 20 minutes of zip, Jessica made the frantic phone call to her  pal – who chilled her pronto!

“She reminded me I hadn’t been wearing the ring when she’d seen me earlier,” said Jessica. “I’m so sorry to put all you guys through this.”

Worse, red-faced Jess confessed, she’d freaked recently when she got home from a jog – and realized the ring wasn’t on her finger. “But Justin reminded me I hadn’t been wearing it. I guess I subconsciously keep taking it off when I go places where I think I might lose it.”

She should lose it! Look, I’m no huge Biel fan. She’s a crummy actress and she says stupid sh-t in interviews but I hate to see her get hurt. Behind that tough girl facade and rock hard ass she’s a softie who’s really in love with a guy who’s effectively treated her like crap most of their relationship. Sometimes you have to play the bad cop and tell a friend her boyfriend is a douche. It’s not easy. Do you think anyone has ever told Jessica that? Like all the times she cried over the break-ups and saw pictures of him grabbing Mila Kunis’ boobs at awards shows, did anyone ever just sit her down and say, “Don’t worry. He’s a douche.” Or was she the kind of girlfriend who told her friends not to say bad things because she hoped they’d get back together. I’m guessing the latter. Say what you want about Biel’s acting or her naivete, but she is loyal. And he definitely likes that about her. Too bad we probably won’t be able to say the same thing about him after they go through with those “I dos”.

Am I too harsh on good ‘ole Justin? Do you think he’s done sniffing for greener pastures?