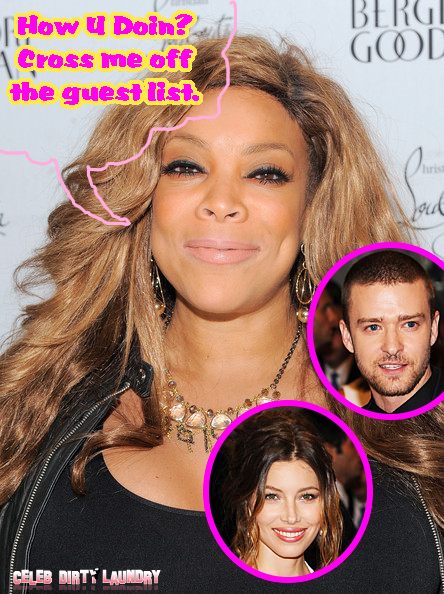 As all-star Hollywood couple Justin Timberlake and Jessica Biel get their wedding plans in order for the summer, outspoken talk show host Wendy Williams is almost certain that the couple won’t make it down the aisle. She says that the marriage looks beautiful on paper but, ultimately, says it won’t end well. Geez, what are you thinking, Wendy, that the couple is going to spontaneously burst into flames before they reach the end of the aisle?

While at the Samsung Hope for Children Gala in New York, Wendy was asked if she could give the future bride and groom a wee bit of marriage advice. She, most certainly with her Wendy Williams diva attitude, refused and instead told Celebuzz the following:

“The marriage looks good on paper, but I’m not so sure about them,” she said, “I think Jessica is very boring. She’s a beautiful girl, but very boring [. . . .] It’s what I call: beautiful for no reason.”

Whoa! Low blow, Wendy Williams. I’m not saying that I don’t agree with you (I don’t find Jessica B to be the most exciting person in the world), but I hope you’re not expecting a wedding invitation! Because, if you were on their guest list before (which I imagine you probably weren’t), they’ve definitely put a big red line through your name now.

Justin Timberlake propsed to Jessica Biel after they were dating on and off again for four years. The couple is set to wed, despite Wendy Williams’s ill wishes, this coming summer.

What do you think about Wendy’s comments? Do you agree with her — is Jessica Biel a bore?