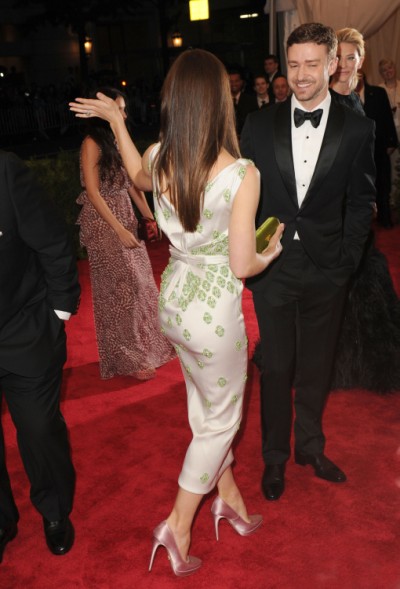 It took him years to get on board, but ever since Justin Timberlake finally put a ring on it, the Sexy Back singer has taken full control over his wedding to fiance Jessica Biel. Justin is involved in ALL the decisions and it seems like he’s drinking the Bridezilla Kool-aid. All he needs now is a white pair of Juicy velour bottoms that say, “Mr. Biel” on the ass, tacky, blond hair extensions and to get into a screaming match with his mother (ultimately dis-inviting her from the wedding) and he’ll be all set.

Oh, but we still have time for all that. In the meantime, In Touch Weekly, print edition reports:

Jessica Biel’s wildest dreams about to become true as her doting fiancé finalizes plans for her fairy-tale wedding. After their star-studded engagement party on May 26, “Justin and Jessica are getting married in Italy,” a close friend tells In Touch, adding that the couple has their eye on the Palazzo Margherita, an exquisite boutique hotel owned by director Francis Ford Coppola in the southern town of Bernalda.

“They originally had the Palazzo in mind for the rehearsal dinner, but they fell in love with it.”

While many groom leave all of the details to the bride, the 31-year-old has become the ultimate wedding planner, choosing the romantic spot with Jessica, 30, for what an insider spills is slated to be an October ceremony.

“Justin picked Italy because it’s very special to them,” the friend explains. “They’re vacationing there a lot and have beautiful black-and-white photo from their trips all over their home. They absolutely love it there.”

“She is the single-handedly most significant person in my life,” Justin has said about Jessica.

I can’t stand it when men get involved with weddings. When I was getting married I was stupid and naive and thought it would be nice if my hubby gave opinions but once he started rattling off ideas (and they differed from my vision) I had to end it right away. This is the girl’s day! Sadly, I think Jessica is so happy he’s marrying her that she will let him do whatever he wants. And Justin is fine with that because he’s always seemed a little selfish.

In a new interview with French magazine, Gala, Jessica revealed what she admired so much in her new fiance. She said. “The ability to communicate well … to be able to express his feelings. Then, loyalty. And, finally, honesty.” I have no doubt Justin communicates. I bet he communicates all over the place all the time. Because it’s all about him. They’ll marry WHERE HE wants to get married. They’ll marry WHEN HE wants to get married. And so on. And so on. Jessica’s in a just engaged bliss right now so she doesn’t choose to see this, just as she chooses not to see the infidelities. Do you think she’ll ever see Justin for the spoiled, controlling, know-it-all he is?