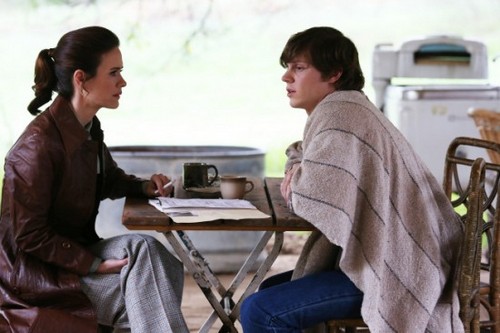 Tonight on FX AMERICAN HORROR STORY airs with the finale of its second season called “Madness Ends.” On tonight’s show Lana leads the charge to finally shut down Briarcliff.. Did you watch last week’s premiere episode? We did and we recapped it here for you.

On tonight’s season finale Johnny sets out to complete his father’s work. Lana leads the charge to finally shut down Briarcliff.  We are going to find out tonight what happened Bloody Face’s confession tape that Lana and Kit recorded.  Rumor has it the angel of death would only be claiming one more victim tonight.  Any ideas which character we will lose?

The finale will see us go back to the beginning of the season.  “We’ll return to the gory scene from Episode 1, when the couple was enjoying some nice romantic oral sex in the abandoned insane asylum (man, some people have the weirdest kinks). This time, though, we’ll see the whole mess from the perspective of Dylan McDermott’s character, the new Bloody Face — just before he takes violent action.”

Tonight’s episode is going to be another spooky episode, which you won’t want to miss. So be sure to tune in for our live coverage of FX’s American Horror Story – tonight at 10PM EST! While you wait for our recap, hit the comments and let us know if you are excited about the season 2 finale of American Horror Story? While you wait for the recap, check out a sneak peek of tonight’s episode below!

Tonight’s season finale takes us back to the very beginning, when viewers were first introduced to Briarcliff and that ill-fated couple that snuck in (Jenna Dewan Tatum and Adam Levine) and found screwing in an insane asylum a huge turn on. We see it from Bloody Face’s perspective and how their loud games totally disturbed him. When the guy pretended to get his arm hacked off good ole’ Bloody Face decided to make it real.

Lana is doing interviews on her book expose and refuses to talk about Bloody Face. She believes she has made him famous enough.  Lana says television was her future career and ambition is what prompted her to go back to Briarcliff. There’s nothing more stimulating than crazy people. With that comment we cut to footage of Lana doing investigative reporting surrounded by varying degrees of crazy. She says it reeks of filth and disease. Lana went back to try and get Jude out but it was too late. She was already gone.

She digs and finds paperwork saying that Betty Drake was released to Kit’s care. She realizes that Betty is actually Sister Jude and so she pays Kit a visit looking for information. He felt like the only way that he could get over the horrors of Briarcliff was by being capable of forgiveness. He took Jude into his home and helped her detox. Then Kit and his kids helped her get in touch with reality again. Finally the kids calmed her and made her happy for nearly a year. They played and danced and finally she gave them her best words of wisdom. Then the angel of death came for her and this time she was more than ready to go.

Lana next discusses how Cardinal Howard ended up, bloody in his bathtub. He slit his wrists shortly after she and her cameras confronted him. She says half of New York blamed her for it but it was his own guilt that he couldn’t live with. Lana admits in the interview that her son didn’t die in childbirth, but that she gave him up for adoption. She went looking for him once and helped to break up a fight that the boy was in.  She also updates the interviewer on Kit, who died of pancreatic cancer at age 40. She said the treatment was a waiting game and he just disappeared. No one knew what happened to him.

All the while this interview with Lana has taken place their has been a guy lurking, pretending to be part of the crew but he looks and awful lot like the Bloody Face that attacked the couple at the very beginning. The rest of the crew leaves and she tells him to come out because she knows that he’s there. They sit down face to face, he has a drink while she smokes. Her son tells her that he knew that day on the playground that she was his mother. He holds a gun to her head and explains that he thinks his father loved him and she took away his chance at having a dad. She plays him and gets the gun off of him then shoots him in the head.