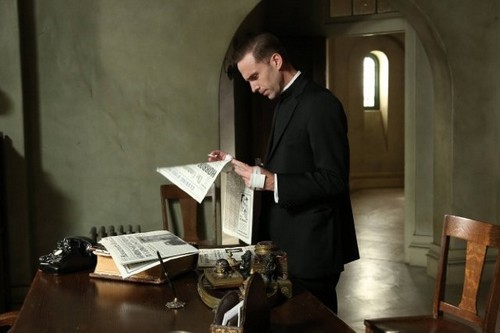 Tonight on FX AMERICAN HORROR STORY with a whole new episode called “Continuum.” On tonight’s show Grace’s obsession with the aliens turns violent. Did you watch last week’s premiere episode? We did and we recapped it here for you.

Last week we were left with many cliffhangers and I am curious to see if they will tie them all up before the season finale.  Last week saw Lana (Sarah Paulson) put Thredson (Zachary Quinto) down for good and Monsignor Howard (Joseph Fiennes) lock Sister Jude (Jessica Lange) away in solitary, and claim to Lana that Jude killed herself.

On tonight’s show which is the final show before the season finale, a deadly new inmate threatens Sister Jude’s chance of release from Briarcliff. Grace’s obsession with the aliens turns violent.

Tonight’s episode is going to be another spooky episode, which you won’t want to miss. So be sure to tune in for our live coverage of FX’s American Horror Story – tonight at 10PM EST! While you wait for our recap, hit the comments and let us know if you are excited about the season 2 episode 12 of American Horror Story? While you wait for the recap, check out a sneak peek of tonight’s episode below!

Tonight’s recap: Alma talks to Grace who is drawing a picture. Kit comes home, very excited about an upcoming march. He even wants the kids to match. Later, he tries to get amorous with her. _—- thinks Grace is obsessed with her drawings which includes aliens. Alma thinks she spends too much time dwelling on the past.

Grace says she is doing the pictures for the kids. Grace says she gets afraid of losing control of herself. He says she is a different person now. They kiss and have sex. Alma overhears. The lights go out Elma thinks the creatures are coming back for her. They are suddenly attacked. He thinks it was Billy and threatens to take care of the issue himself to protect his family. The cops says that polygamy is illegal. Kit realizes he is on his own.

Grace asks if Alma is upset because Kit is spending more time with her. Alma says she is tired of Grace acting like what happened was a spiritual experience when it was traumatizing for her. Grace says that the children are a living proof of the good that came from it. Grace thinks they will come back for Kit. Alma says her life was much better before he brought home an axe murderer.

Kit finds Grace drawing pictures in the middle of the night. Grace tells Kit that she loves him and Alma and their miracle babies.  She says their life is more precious than she could’ve dreamed but something’s changed and she won’t live in fear. She won’t live in fear and Alma needs to understand that. Alma suddenly attacks Grace with axe! Kit pulls the axe out of Grace.

Monsignor Timothy Howard wants to have a word with Jude. She says Judith is dead and she’s been renamed Betty.  The priest says he’s been appointed cardinal. She says good for him—he had a dream and made it come true. He says he is arranging for her release because he can’t leave her to rot. She doesn’t want false hope. He promises to make her a believer.

An inmate says that Jude can either rule the roost with her or be one of those ruled.  Jude is later surprised when the woman ends up as her roommate. She says everything in the cell belongs to her—including her. Jude says that she’s about to leave. She says that’s not true and there’s only one way out.  Jude warns her to stay away and wants nothing to do with her. She says she’ll change her tune.

The woman stabs Remy for taking his pills. She can’t have anyone challenging her. She blows Jude a kiss. Later, the guard enters to see Jude attacking another inmate who she has mistaken for the other woman. She is put into a strait jacket and meets with Dr. Crump who resembles the inmate that Jude believes has been torturing her. Dr. Crump wants her to make more of an effort to get along with her roommates. Jude says she needs to speak with Monsignor Timothy Howard . Dr. Crump says he is a Cardinal and was appointed over two years ago. Jude can’t believe it since she just spoke to him. Dr. Crump says she is confused. Jude says Peppa will vouch for her but it turns out she died in the winter of 1966. Dr. Crump will talk to the doctor about upping her meds.

Lana is introduced at an event for her book in 1969. She does a small reading.  During her reading, Dr. Thredson says she has lied about the events. The woman in question says she was her lover. He says is only interested in fame. However, it turns out she has only imagined the interruptions to her account of events.

Kit turns up at the event. Lana says she is sorry to hear about what happened to grace and is sorry for what happened. She had wanted to write.  Kit says that she has become a cheap celebrity, not a reporter. Lana is proud of the life she’s made and thought he would understand.  Lana says she could be drooling with the other lunatics. He says his wife is one of those lunatics.

Kit visits Alama in the asylum. He says the kids leave a plate in case she comes home and is hungry. She wants the kids to come visit her but changes her mind given the circumstances of the place.  It is revealed that Alma died because her heart just stopped. He apologizes to his dead wife for failing her, grace and the kids. Lana says everyone is gone but them. Kit says that Jude is still there.

Kit plans to take Alma home and bury her there. Kit comes upon Jude. She doesn’t seem to recognize him. She thinks ‘The Flying Nun’ is based on her life but she doesn’t need the hat to escape. She can fly without it.

Kit tells Lana that they have to get the asylum shut down. Lana is sorry for all that’s happened, but that Jude is in there by her own choices. Kit says she’s become hard. Lana says it’s how she survives.

Bloody Face goes to a book store and wants the book that Lana wrote which seems to be one of the few last original copies. He says he gave her a chance to name her price. He wants that book because it’s her fate to have it.  He wants to meet his mother and then present this book of lies: he’s in her book except that he didn’t die when she gave him up 48 years ago. He says when she fully understands, he will pull out his gun and shoot her. He will have completed his father’s work then but first he’s going to need that book. The terrified woman gives him the book .