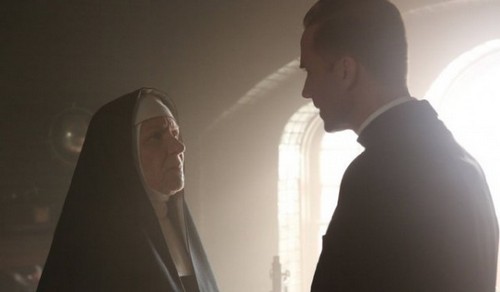 Tonight on FX AMERICAN HORROR STORY:ASYLUM airs with a whole new episode called “Spilt Milk.” On tonight’s show Grace brings Kit devastating news about the aliens’ experiments on Alma. Dr. Thredson receives an unexpected visitor. Did you watch last week’s premiere episode? We did and we recapped it here for you.

This week series creator Ryan Murphy teased about what we can expect in Season 3, he said,  “I sorta feel like for the third version I want to do something that’s a little bit more ‘evil glamour.'”  He went on to say, “One of the things that I missed this season was I really loved having that Romeo & Juliet youth story with Violet and Tate [in season one]. I want something like that again and we’re doing something like that in the third season.”  Yikes I cannot wait!

Tonight’s episode is going to be another spooky episode, which you won’t want to miss. So be sure to tune in for our live coverage of FX’s American Horror Story – tonight at 10PM EST! While you wait for our recap, hit the comments and let us know if you are excited about the season 2 episode 11 of American Horror Story? While you wait for the recap, check out a sneak peek of tonight’s episode below!

It’s time for another visit to American Horror Story’s asylum. Grace is adjusting to caring for her baby and is reliving the birth of her baby. She explains to Kit how fast pregnancy goes with the aliens and how they also make mistakes. Alma was one of those mistakes and she drowned at the hands of the aliens. Kit now says he wants to be a good father and asks Grace to marry him.

Mother Claudia goes to Lana and tells her that she can help her. She gives Lana her personal file and directs her to her clothes and a waiting cab. She tells her she wants the asylum knocked down. Lana goes to Jude and tells her that she’s leaving but that she’ll be coming back to get her. Lana makes it to the cab as Dr. Tredson follows her outside. She pulls away showing him both the disk and her middle finger.

Lana comes back for Oliver, gun in hand. She tells him the police will be there soon and so he starts talking, telling her the things that he has done. As the sirens approach he tells her that he has no use for her any more and it’s best if Lana is known as his last victim. She shoots him on the spot and tells him that prison is too good for him.

Last week Jude had electroshock therapy and instead of it wiping out her sanity she seems to be getting flashes of her memory back. She asks to speak with Monsignor Timothy and starts discussing how he gave his virtue away to the devil. The two have a screaming match and Jude tells him that she has been blessed with the gift of total clarity. Timothy suggests that Jude needs alone time.

Kit had been locked down and all of a sudden he is served with release papers and clothes from the Salvation Army to put on. He asks to see the Monsignor and demands that he release Grace to or else he’ll be talking to reporters.

Kit takes Grace home to his old house and inside the find the supposedly long dead Alma sitting and holding a newborn.

Lana thinks that she’s ready to have a backroom abortion because she can’t imagine carrying her baby but as the nurse begins the procedure she changes her mind. She decides that there will be no more death. Lana instead goes to the police and convinces them to pay Briarcliff a visit to try and see Jude. When they get there Timothy gives them documented proof that Jude hung herself. We see Jude is actually alive in a cell by herself praying. In the last scene of this episode Lana has had her baby and was supposedly giving it up for adoption but it is starving and can’t handle formula so she ends up nursing it. Tune in next week to see if Lana chooses to keep her child.