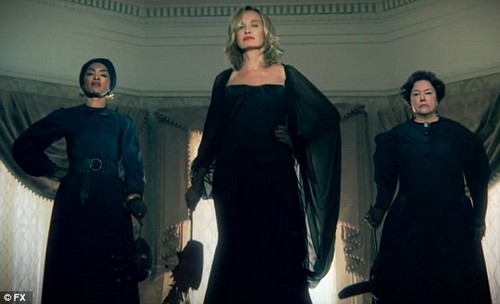 Our favorite creepy spooky FX drama, American Horror Story is having the battle of the divas on the set and it looks like one of the divas might just be leaving.  Jessica Lange who has played a different character each season is said to be fed up with all the competition on the set.

The show initially brought on Academy Award winner actress Kathy Bates to play Socialite and serial killer Marie Delphine LaLaurie and Jessica was alright with that.  But the producers did not stop there, they hired critically acclaimed actress Angela Basset to play Voodoo Queen Marie Laveau an enemy of Marie Delphine LaLaurie.

The veteran actresses are acting like Divas on the set and all three want more air time.  A source for National Enquirer reports that, “Kathy’s been chewing up the scenery, and Angela has also been given a major story line.  All three are angling for more screen time.”

Jessica use to rule the roost and she is not pleased with the current situation.  There have also been rumors that creator Ryan Murphy does not want to stop with these three ladies.  He has a wish list that includes: Joan Collins; Sissy Spacek and Donna Mills.  This is all making Jessica feel uncomfortable, she feels like she is being pushed out.

Add to all of this Jessica was already considering to only do one more season of the show.    Jessica has been feeling like it might be time to retire, do one or two more stage productions and then move on to doing other things with her life.

The changes and new hires on the set might just be enough to push Jessica to make the decision to leave sooner.  As one insider said, “as far as Jessica is concerned, the show ain’t big enough for all of them!”

On thing we know for sure American Horror Story has been renewed but FX for a forth season and producers and the creator want Angela Bassett and Kathy Bates, who play rivals Madame LaLaurie and Marie Laveaux on the new season.  He recently said, “I have approached them, and they wanna do it, they love what they get to do.”

What do you think CDLers, would you miss Jessica on American Horror Story?  Are you excited about all the people that the creator is looking to bring on board?  Hit the comments and let us know what you think.