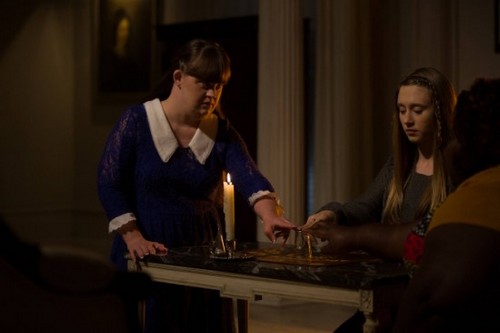 Our favorite creepy drama AMERICAN HORROR STORY continues tonight with another new episode called “The Axeman Cometh.” On tonight’s show, Madame LaLaurie is confronted by old ghosts. Did you watch last week’s premiere episode? We did, and we recapped it right here for you!

On last week’s show, besieged by Marie Laveau’s army, Zoe unleashed a new power — and we can’t wait to find out what exactly that might’ve been. Fiona and Myrtle clashed over control of the Coven and, as usual, Fiona came out on top — at least for now. While Myrtle was framed and burned at the stake, Misty found the crispy Myrtle and supposedly pulled her back into the land of the living with her resurgence power.

On tonight’s show, Zoe, Queenie, and Nan make contact with a dark spirit trapped in the Academy. Also, Cordelia’s new power (gift of profound vision and sight) brings on a heartbreaking revelation.

Tonight’s episode is going to be another spooky one, and you won’t want to miss it. So be sure to tune in for our live coverage of FX’s American Horror Story – tonight at 10PM EST! While you wait for our recap, hit the comments and let us know if you are excited about the season 3 episode 5 of American Horror Story. While you wait for the recap, check out a sneak peek of tonight’s episode below!

The show opens up with someone on the typewriter. We’re in New Orleans 1919; the man walks down the dark alleyway. He talks about how he’s a spirit — how he’ll one day return and can never truly be killed. He says that he’s the Axeman. He’s writing a letter and he swears that, when the time’s right, he’ll return and claim victims as he sees fit.

A group of women formulate a plan to rise up against the Axeman — as he’s about to go on a killing spree. He swears to kill everyone who doesn’t have a jazz band playing in their homes.

As he’s walking down the street, he finds a house that doesn’t have a band playing. He walks into the house. The quiet house just so happens to be the Academy — filled with the group of women, the descendants of Salem. They’re witches.  The Axeman walks into the Academy with his axe. One of the women is sitting there reading tarot cards. She draws the Death card. “Just as I expected,” she says. She stabs the man and, dressed in dark cloaks, the coven of witches come out from hiding and begin stabbing the horrible serial killer. He’s REALLY dead — but his spirit will linger.

We’re in the present day. Zoe looks through a box of Zoe’s things. She finds a small pistol. She drops and empty bottle of liquor and it rolls toward a small cupboard with a door. She opens the door and, in the crawl space, finds an old spirit board.

Zoe takes her findings down to show Nan and Queenie. Zoe says that the witches have been dying consistently over the years and that it’s time to find some answers. They put the spirit board down on a table and they begin asking the board questions. The board begins answering them. Queenie asks the spirit, ‘Did you die here?” The spirit says yes. The spirit also reveals that witches killed him. Zoe asks if this is Madison’s spirit, but the board says no. It’s the Axeman. Queenie puts an end to the spirit session, because she understands that messing with this stuff can be dangerous.

Meanwhile, Fiona is getting a chemo session. She’s having a difficult time because she can’t stop listening to people’s thoughts. Fiona says that her daughter needs her. She’s feeling frail, and she wants to beat her cancer — for Cordelia. Fiona says she’d like just one last great love affair.

Back at the academy, Zoe does some research on the Axeman. Zoe is concerned because they didn’t get a chance to ask about Madison. Nan finds an old photograph of the class of 1919. They realize that those witches killed the Axeman. Zoe says that, if there’s a chance the Axeman (A) knows where Madison is, they need to try. Queenie and Nan say that they won’t help Zoe contact him because it’s too dangerous. But Zoe goes ahead and uses the spirit board by herself. She asks A where Madison is — he spells her location on the board.

Zoe goes up to Spalding’s room. The smell is appalling — the smell of a dead body. She opens the chest where Spalding is keeping Madison. She’s shocked to find her body there; Spalding comes up behind her and wraps his hand around her face.

Fiona, after her session, awaits for Cordelia’s return. Cordelia comes in, blind, with a walking stick and is being overwhelmed by her new sight, her new visions. She begins to piece together her husbands murderous secrets. When Fiona touches Cordelia, Cordelia sees that Fiona assisted in the burning of Myrtle Snow.

Meanwhile, Nan, Queenie, and Zoe questions and sort of torture Spalding. His mind confesses that he killed Madison, but Zoe still isn’t convinced.

Back in Misty’s swamp, she’s healing Myrtle. Kyle soon arrives and she gives him a bath. As Misty gives him a bath, he freaks out;  he has flashbacks to the times his mother molested him. Zoe shows up and says she needs Kyle’s help.

Before the commercial break, we see Cordelia’s husband show up at Marie’s salon. He says, “We have a problem.” It seems as if he’s been working for Marie all along, perhaps gathering enough sacrifices to fuel her magical rituals? We’ll have to wait to find out for sure!

Zoe binds Kyle in iron chains at Misty’s swamp. Zoe has brought Madison to Misty’s house. Zoe begs Misty to bring her back — because she has the gift of resurgance. Misty says there’s too much death inside her, but she ultimately tries. With Zoe’s help, Misty brings Madison back.

Back in Marie’s salon, Marie says that she and Hank now have a problem. Turns out Marie hired Hank to hunt the Salem Witches. Marie is freaking out now; she tells Hank no more nonsense. “You bring me there heads. All of them! And then you burn that house down to the ground.”

Back at the house, Zoe says that they  need to keep Madison under the radar — until she’s “better” and fully healed.

Cordelia is having trouble adapting to her new situation. As she begins undressing, the Axeman appears.

Zoe, Queenie, and Nan watch over Madison, who’s struggling to come back to life. She’s talking, but she’s delusional, and her senses are dull. They tell her that she died, and they ask her what’s the last thing she remembers. All she remembers seeing is RED (Fiona was wearing red when she killed Madison).

Back in Cordelia’s room, Cordelia talks with the Axeman. He tells about how he was promised his release if he helped Zoe, but she lied. And now he’s trapped in this weird limbo area. He attacks Cordelia. She screams. He’s chasing her with his axe. Zoe runs downstairs to find a spell that will banish the spirit — or get rid of him. The spell seems to be successful. He walks out of the house and appears very ALIVE.

Fiona is in the bar. The Axeman walks into the bar and says, “Hello, pretty lady.” Fiona smiles. She’s fragile, looking for love, and the Axeman is ready to prey upon her.