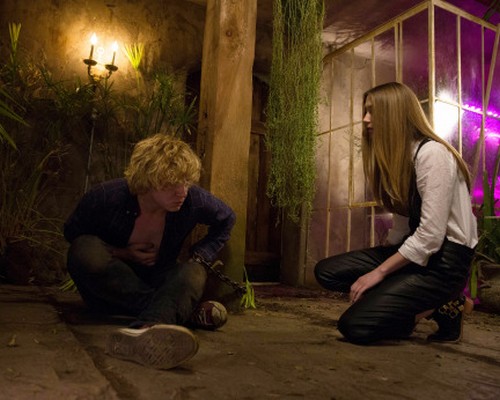 Our favorite creepy drama AMERICAN HORROR STORY continues tonight with another new episode called “The Dead.” On tonight’s show, Cordelia makes a fateful decision about her mother. Did you watch last week’s premiere episode? We did, and we recapped it right here for you!

On last week’s show, Zoe, Queenie, and Nan made contact with a dark spirit trapped in the Academy. Also, Cordelia’s new power (gift of profound vision and sight) brought on a heartbreaking revelation.

On tonight’s show, Fiona finds new purpose in a dangerous love affair. A night out with LaLaurie leads Queenie to question her place in the Coven. Cordelia makes a fateful decision about her mother.

Tonight’s episode is going to be another spooky one, and you won’t want to miss it. So be sure to tune in for our live coverage of FX’s American Horror Story – tonight at 10PM EST! While you wait for our recap, hit the comments and let us know if you are excited about the season 3 episode 7 of American Horror Story. While you wait for the recap, check out a sneak peek of tonight’s episode below!

The show opens in a tattoo parlor. Kyle is singing and his frat bros are all getting tattoos. This is obviously a flashback because Kyle is talking coherently (not a zombie) and his frat friends are alive. We come to the present; Kyle is chained up and he’s clearly distraught. Zoe has a gun behind her back, and she’s thinking about shooting him — to put him out of his misery.

Madison is sitting on the staircase smoking by a candle. She’s trying to readjust after being brought back to life by Misty. She says she’d give everything she has or had to feel pain, to just feel something. Because she was brought back, she can’t feel anything.

Zoe crouches beside Kyle. She tells him that he died, but that she should’ve just let him go, and now she’s preparing to kill him. He reacts negatively and somehow wriggles free and grabs the gun.

Queenie wakes up in the middle of the night for a snack. Madame LaLaurie wakes up and is, well, sort of nice to her. They bond over their hunger and go out together to get some fast food. LaLaurie says that this is the best food she’s ever eaten.

Hank calls Cordelia. She tells him to go away. Cordelia gets up and calls our for Delphine. She hears someone. It’s Madison. Madison finally reveals herself to Cordelia. Cordelia, with her new gift of sight, touches Madison. She sees that Fiona murdered Madison and Cordelia is, reasonably, pissed.

Fiona and The Axeman share a drink in a private room. She goes to freshen up in the grungy bathroom but, as she does, her hair begins to fall out. She doesn’t notice the dead body in the shower. Fiona kisses the Axeman, but then she realizes that this is nothing. He says that this might be their destiny, but she says she’s done with surprises and that nobody would want her. She tells him she’s a wretched human being. But the Axeman continues to seduce her and they have sex.

Meanwhile, Zoe brings Kyle back to the school. She says that he needs to learn how to communicate and teaches him how to vocalize his needs and want. She tells him that he’s not stupid, that he has everything he needs in his head already, but he’s having trouble adjusting. Madison walks in and says that Cordelia wants to chat with her. When Zoe leaves, Madison and Kyle bond over their death experiences, and she says somehow it feels more empty in this living world than that cold realm beyond.

Queenie goes to visit Marie. Marie knows who she is and she says, quite frankly, that she’s surprised she hasn’t visited sooner. Marie invites her to come join their land. But there’s a price: Bring Delphine to her.

Cordelia and Zoe have a conversation. She says that Zoe has a huge bullseye on her back. Cordelia, with her new sight, has gotten badass. She tells her that Fiona killed Madison and that if Fiona even so much as suspects she’s the next Supreme . . . . She’ll be next. She says there’s only one thing they can do: Kill Fiona. She says, “We’re going to kill her once. Kill her good. Kill her dead.”

Fiona wakes up the next morning after her night with the Axeman. She and the Axeman have a conversation about Fiona’s past. Because he was locked in the academy for so long, he grew up with Fiona — watched her. He says that his feelings for her grew complicated, and he fell in love. The Axeman begins to reveal who he is, and Fiona says she doesn’t believe in ghosts. Right now, she’s having mixed feelings.

She storms out and tells him to go haunt someone else’s life.

Zoe talks with Spalding, who can now talk. Zoe found Spalding’s tongue in the attic, enchanted by Myrtle Snow. Zoe says that Myrtle wasn’t a good enough witch to bring back his tongue but that she is. Now that his truth-telling tongue is back in his head, he can’t tell lies. She asks if he killed Madison Montgomery. He says no. She then asks if it was Fiona Goode. And he says yes, even though he hates himself for betraying his love. Zoe stabs him, kills him.

Queenie finds Madame LaLaurie. Queenie asks her, “What’s the worst thing you ever did.” Queenie says that, perhaps, they could be true friends. There’s a flashback. She reveals that she killed one of her handmaiden’s babies. Queenie is shocked by this, and she says that there are a lot of things she regrets. It was a different time, a different world, and that she’s happy that, maybe, she could have a true friend in Queenie. Will Queenie turn her in to Marie?

Zoe is taking a shower and Madison comes in. They talk about Kyle, how they’re going to deal with both liking him. Madison says she won’t give him up because it’s the first time he’s felt anything since being brought back. They walk into the room with Kyle and proceed to have threeway.

Queenie takes LaLaurie for a walk . . . . She brings her to Marie’s shop. Madame LaLaurie is distraught, but Queenie doesn’t care, and she cuts her while she’s in a cage. Sitting in front of a mirror, Marie brushes Delphine’s blood on her face.