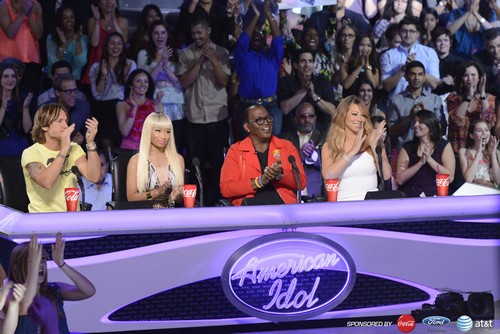 Last night AMERICAN IDOL exploded with talent!  The final 5 ladies battled it out for America’s vote and they were, “In It To Win It”  as Randy said.  Each of the competitors sang two songs each last night: the first choice was a “Divas” song and the second song was from the contestants’ birth year.  Did you watch last night’s show? We did and we recapped it here for you!

I did not expect some of the “jaw dropping” performances from some of the Idol hopefuls.  Candice Glover who seems to be the one to beat, impressed the judges with her rendition of “When You Believe” by Mariah Carey & Whitney Houston for her diva song.  Randy said, “Again, that’s the best vocal of the night. You’re so in the zone. It was amazing.”   Did you see her performance last night?  If you missed it you can see it here.

Sadly, Amber Holcomb who sang “Without You by” by Mariah Carey for her diva song, fell a bit flat last night.  I really like her a lot and I fear this performance might send her home.  Although she was not the worse performance of the night, because she has been in the bottom three several times, it might be the time for her to leave.  Nicki said about her performance last night, “There wasn’t any feeling in the beginning. She needed to feel it. She felt restricted.”  If you missed Amber’s performance, you can see it here.

Janelle Arthur sang Dolly Parton‘s “Dumb Blond” last night and although America seems to love her, Nicki was not impressed with her performance last night.  Nicki told her, “You’re in jeopardy of going home tomorrow, but I loves her you matter what.”  If you missed Janelle’s performance from last night, you can see it here.