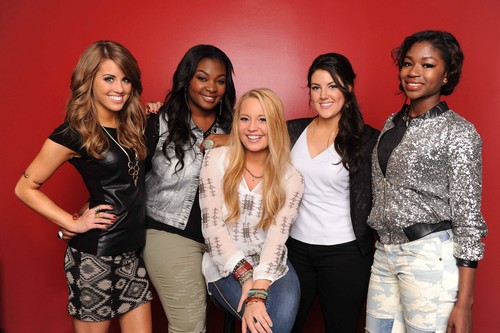 AMERICAN IDOL returns to fox with a new episode and tonight each of the remaining 5 idols will perform 2 songs! On tonight’s show the top 5 female finalists compete for America’s vote and they are, “In It To Win It.”  The theme for tonight’s song choices are “Divas” and songs from the contestants’ birth year.  Did you watch last week’s show? We did and we recapped it here for you!

On last week’s show the Top 6 will sang two songs.  One came from the Burt Bacharach and Hal David songbook and the other was “A Song I Wish I Had Written.”  Sadly on last week’s show Cuban born 21-year-old Lazaro Arbos was sent home by America.  Lazaro’s sang a rendition of The Carpenter’s song “Close To You”  and the judges were not impressed.  Randy said, “he was speechless. He loves Lazaro the person and he’s inspirational to all of them, but it was horrible. That was the worst performance he’s had the show.”

On tonight’s show the the remaining ladies – Janelle Arthur, Candice Glover, Kree Harrison, Amber Holcomb and Angie Miller – will continue to battle it out on stage in hopes of becoming the first female AMERICAN IDOL winner since Jordin Sparks in Season Six.  If you want to see the songs that idol’s are singing tonight, go here!