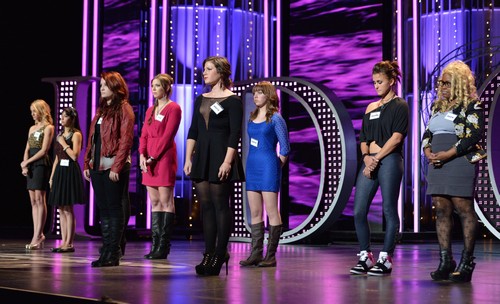 On last night’s show several of the girls were eliminated during the solo and group performances.  There were tears, crying, cat fights and a lot of contestants that did not impress the judges.

On tonight’s show the we will see the final ladies individual performances and the ladies will be tapered down to 20 ladies.  We will also see an additional 8 men who were sent through last week eliminated.  By the end of the evening 40 contestants will move ahead to the Las Vegas round.

Meanwhile, AMERICAN IDOL will kick off IDOL ACROSS AMERICA, a cross-country relay of the IDOL microphone, traveling from New York City to the IDOL stage in Los Angeles. Sponsored by Ford, Coca-Cola and AT&T, the “mic” will start its journey in New York City on Friday, March 1, when host Ryan Seacrest will launch the two-week, 5,000-mile trek to the IDOL stage. The “mic” will arrive just in time for the Top 10 live performance show on Wednesday, March 13.

Stay tuned to tonight for a full live recap of tonight’s episode. We will keep you up to date on all American Idol news, reviews and spoilers and make sure to check back here regularly for more information on your favorite television shows! So don’t forget to come back to this spot at 8:00 PM for a live recap of American Idol to see the “Hollywood Week Women” – recap at 8:00 PM EST!

The final day of Hollywood Week is upon us and the 47 ladies that remain are emotionally exhausted.  The judges do not know how they are going to narrow it down.  Today more than 1/2 of the ladies journey will be ended today.

Angela Miller, she is taking a huge risk she is singing an original song she wrote to sing.  The song is called, “You set me free,” she is playing the piano as she sings the song.  She is fantastic, I can already tell the judges love her.  The judges all clap and Randy, WOW’s a lot.  Randy says, “Who Knew.”  Keith says if it was recorded he would play it in his car.  Mariah loved the song and the sentiment.  Nikki says that before today, she was not in their brains, but that song changed it.  The judges congratulate her.  She has set the bar high and put pressure on the rest of the girls.

Candace Glover, singing, “This Girl is On Fire” by Nikki Minaj and it is another home run.  Keith tells her she took it and made it her own and it was incredible.  He thinks she did a good job.  Nikki really likes her.

Janelle Arthur, singing, “I Told You So,” by Carrie Underwood.  Nikki loves that she always keeps it subtle.  She thinks she is a super star, a country superstar.

Zoanette Johnson the song she is singing she just felt it yesterday and made it up on stage.   All I can say is what a freak.  She is playing the drums too.  Keith thought she rocked.  Nikki is bowing down at her feet tonight.  She is honored to say she has been part of the Zoanette era.

Shubha Vedula, Mariah tells her she is back and she sang a Mariah song.

Juliette Chayed, Nikki loves the song and did not want it to end.

Kez Ban, She will be singing an original song for the judges today.  It is her very favorite original she has written.  It certainly is a very short song. Nikki appreciate her artistry and tells her they will discuss it and get back to her.  Then Nikki tells her that her journey ends today.  She is sad to be leaving so soon.

Ashlee Feliciano – Randy tells him it was very surprising, it was not a bold choice.  He tells her music is fun.  They will deliberate and get back to her.

Kree Harrison is singing “Star” by Grace Potter.  Keith has goosebumps and loves her.  Randy thinks she did a nice job.  Keith tells her he fought for her several times and he knows why.  Mariah thinks there is something that feels genuine about her.  Nikki thanks her and tells her today she became a star.

Lauren, Holly Marie, Ariel are the four girls who are eliminated.  They ask Stephanie Schimel to sing again so they can make a final decision.  The next person the judges want to hear sing again is Rachel Hale.

They decide Rachel will move ahead and Stephanie will go home.

The judges congratulate the 20 who are the semi-final ladies contestants and they wish them good luck.

Next we will find out who the 20 men are going ahead.

The men hit the stage and Randy tells them 8 will be eliminated.  They want to hear Adam Sanders again, next Josh Holiday.

The judges let the remaining men that they are American Idol’s top 20 guys.  The girls join the men on stage.  These are the contestants going to Las Vegas for the next round.

Next week the semi-finals take the stage in front of the judges and the live audience.  Will your favorites make the cut???