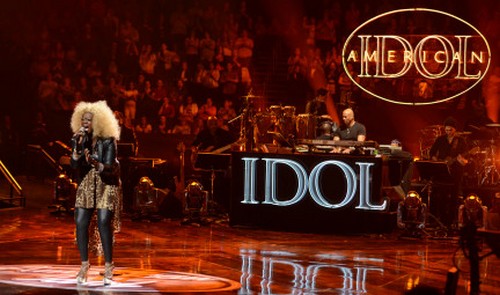 Tonight on FOX  AMERICAN IDOL returns  with Round 3 of the Las Vegas round.  Last week the first group of men semifinalists performed on the stage of Cirque du Soleil’s Beatles LOVE Theatre at The Mirage. After another round of intense deliberations, judges Mariah Carey, Randy Jackson, Nicki Minaj and Keith Urban announced the second five semifinalists who have secured a coveted spot in this season’s Top 20.

The five guy semifinalists are Charlie Askew, 18, from Little Rock, AR; Curtis Finch Jr., 24, from St. Louis, MO; Paul Jolley, 22, from Palmersville, TN; Elijah Liu, 18, from Rowland Heights, CA; and Devin Velez, 18, from Chicago, IL.  Did you watch the episode?  We did and we recapped it here for you.<

On tonight’s show as the Sudden Death Rounds continue when the second group of girls – Melinda Ademi, Janelle Arthur, Juliana Chahayed, Cristabel Clack, Aubrey Cleland, Candice Glover, Rachel Hale, Jett Hermano, Zoanette Johnson and Breanna Steer – perform and the judges decide which five will join the Top 20.  It is survival of the fittest on idol!  Who are you rooting for tonight?

Stay tuned to tonight for a full live recap of tonight’s episode. We will keep you up to date on all American Idol news, reviews and spoilers and make sure to check back here regularly for more information on your favorite television shows! So don’t forget to come back to this spot at 8:00 PM for a live recap of American Idol to see the “Las Vegas Round – 3”  recap at 8:00 PM EST!

Melinda performs first, singing “Nobody’s Perfect”. Keith tells the 19 year old that he loved the performance, that she has raw talent and potential. Nicki says that Angela’s performance was better because she connected to the “Jessie J” song. Nicki suggests she start tackling other artist. Randy says it was just ok and didn’t have enough big moments, especially in comparisons to the others in the competition. Mariah is complimentary but knows she was nervous.

Candace sings Aretha Franklin’s “A natural Woman”. She gets a standing ovation from Keith.  Ryan jokingly says that the screaming crowd did not like it. Keith says she made a great song choice and that everyone responded because she’s a natural singer. Nicki says that Candace was born to do this and it boggles her brain that Candace didn’t make it past Vegas last year since she has one of the stronger voices. Randy says that Candace is one of his favorites and that she’s grown; it wasn’t her best performance but she was really good. Mariah says she agrees that she is a bonafide singer and compliments her on changing some arrangements.

It is now Julianna’s turn to sing. Nicki says she was timid, but it may not work with the other voices. She likes that Juilianna does her. Mariah says that there was an angelic quality to her voice.

Jett sings ‘The Only World In the Girl’ from the piano. Kevin likes that she did a unique arrangements of this song, taking a song and making it her own. He liked that she slowed the song down. Nicki liked the arrangement and her voice but that it did not climax to anything. Randy thought she would get up from the piano and rock it out. He wanted a little bit more. Mariah always felt she was a unique addition; it didn’t matter to Mariah that she didn’t have a fit at the end but she enjoyed the first half of the song.

Cristabelle sings “No One”. She gets a standing ovation from Randy. Keith says she was fantastic and loves her voice. He feels it was a good song for her and that she has crazy potential.  Nicki says she likes the raspiness but that was it. Randy loved the rasp and felt she was on point. Randy says that she is a race horse singer and allowed herself to just go. Mariah gives it up for the background singers and compliments Cristabelle.

Aubrey sings “Sweet Dreams”.  Keith is glad that she took the song into her own place, really loving her fire and poise. Nicki says she is obsessed with Aubrey. Nicki says that for the first time, someone came out singing and feeling like a current artist. Nicki says normally she hates it when people do Beyonce because there’s no comparison but she had a rich texture. Randy says he’s a huge fan too, but he doesn’t think it was the perfect song since she didn’t show enough range. Mariah thinks she is limitless and hopes she continues.

Rachel performs “Undone in Hollywood”. Keith thinks the song may have gone on top of her in parts. Nicki wants to know where her burst of confidence came from. Rachel says she’s been praying. Nicki says she just came alive on stage. Randy is happy she chose an uptempo song and brought out some energy. Randy says prayer works.

Breanna sings “Bust Your Windows”. Keith says he loves that song despite its nature. He thinks she sang it right and she made him believe those lyrics. Nicki says that she and Aubrey that a record deal could go out and get #1’s on the chart, that they could take over; that she was giving her sexy on a stick. Randy says that song choice was perfect for her. Mariah says that sometimes she’s glad that contestants get to choose their own songs. She thinks Breanna did an amazing job.

Jeanelle performs “ Just A Kiss”. Keith doesn’t think that was a perfect song choice for her to sing. Nicki says that the song fell flat. Nicki says that she does not have to overdo it and tells her not to ever try too hard again.  Randy says Janelle is his favorite country singer, but that was not the right song for her.  Mariah says that it wasn’t the best song choice because something simpler would’ve been fine but she’s rooting for her.