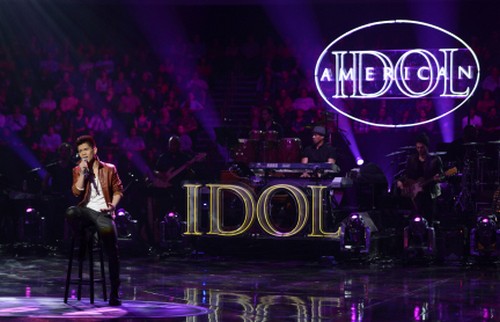 Tonight on FOX  AMERICAN IDOL returns  with Round 2 of the Las Vegas round.  Last night the first group of girl semifinalists performed on the stage of Cirque du Soleil’s Beatles LOVE Theatre at The Mirage. After another round of intense deliberations, judges Mariah Carey, Randy Jackson, Nicki Minaj and Keith Urban announced the first five semifinalists who have secured a coveted spot in this season’s Top 20.

The five semifinalists  chosen were Kree Harrison, 22, from Nashville, TN; Amber Holcomb, 18, from Houston, TX; Adriana Latonio, 17, from Anchorage, AK; Angela Miller, 18, from Beverly, MA; and Tenna Torres, 28, from Queens, NY.
Did you watch last night’s show?  We did and we recapped it here for you.

On tonight’s show the Sudden Death Rounds continue when the first group of guys – So tonight the first tenguys from the final twenty will take the stage.  They’ll each get one chance to wow the audience and impress the judges before a sudden death round of eliminations.