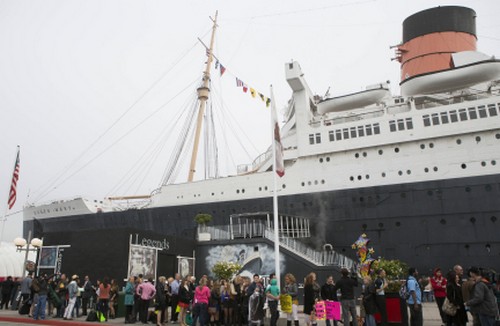 We are in the third week of the audition process on AMERICAN IDOL and tonight we are headed to Long Beach, San Antonio and Oklahoma City as the madness continues. Our judges, Mariah Carey, Nikki Minaj, Keith Urban and Randy Jackson head to Baton Rouge, Louisiana in hopes of finding the next American Idol. Did you watch last week’s auditions in Baton Rouge, LA? We did and we recapped it here for you!

On last week’s Cajun Country auditions the judges seemed to have called a truce to all their bickering  The judges were happy to be in Randy’s hometown and hoped that they would find great talent.  Keith exclaimed that all good music came from the south.  In the end 34 contestants got the golden ticket to Hollywood from the Baton Rouge auditions

On tonight’s show the auditions continue to Long Beach, Calif with the auditions being held aboard the Queen Mary, which was docked in Long Beach.  The Long Beach set had its fill of special, expressive moments too, such as when an 8-year-old girl showed up dressed like Nikki Minaj,  She had a pink and blue wig – to support her auditioning aunt.  Apparently Nicki told her she loved her color palette and talked to her about how important it is stay in school.  The little girl sang ‘Starships’ for Nicki, who let the girl and her brother sit on her lap for the audition.

Tonight we will have a change to see auditions in two different towns.  Will the contestant that inspires you most audition from the Lone Star State or from the sun-soaked beaches of Southern California?

Stay tuned to Celeb Dirty Laundry for a full live recap of tonight’s episode. We will keep you up to date on all American Idol news, reviews and spoilers and make sure to check back here regularly for more information on your favorite television shows! So don’t forget to come back to this spot at 8:00 PM for our live recap of American Idol to see the “Auditions #5″ – recap at 8:00 PM EST!

It’s the last week of American Idol auditions and this week they’re hitting San Antonio and Long Beach. We jump right into the mix with Vincent Powell who is a 24-year old praise leader. Keith Urban loved him and Nicki Minaj thinks he could do a gospel record and Mariah Carey says he sings like an angel. Of course Vincent is going to Hollywood.

Savannah Vottion breezes in and after telling about being a single mom to a 5-year old daughter she blasts the roof off with a rendition of At Last. Randy Jackson thinks she has natural talent and Keith here’s empowerment in her voice. Nicki believes she was born to sing and it’s off to Hollywood she goes.

Cristabel Clack is a worship leader and she sings like it. She covered Alicia Keys and everyone absolutely loved her so it’s onto Hollywood.

Ann Difani loves country music and the stories that the songs tell. She performs a Faith Hill song and the whole panel thinks she’s adorable with a nice tone. She easily makes it through.

Sanni Mi’Miaurra is asuper charismatic young dude with a huge voice. Nicki tells him his runs were pretty and it all sounded right. Randy calls him fresh and Keith thinks he’s balanced. Onward he goes to Hollywood.

Adam Sanders walked up looking like he’ll be a huge fail. No one thought he could sing especially when he said he loved soul and then he belted out an Etta James song that was crazy good. The judges were almost too stunned to push him through to Hollywood.

The Queen Mary is the location for the Long Beach auditions. Mariah and Nicki are MIA due to previous commitments. Shuba is first up and she does a Christina Aguilera song- possibly better than Xtina herself. The guys bumped her on to Hollywood.

Matt Farmer is another contestant with a strong set of pipes. He has a huge voice with kind of a Gavin DeGraw thing going on. The judges all like him because he’s different and he moves on to the next round.

Jesiah Keria is on deck when the fire alarm goes off. They all had to basically “hit the dirt” as Mariah said and get off the ship fast. When they finally come back Jesiah starts over and I love her. She reminds me of Jill Scott. The judges love her refined voice and she goes on to Hollywood pronto.

Micah Johnson is one of those guys that tugs at your heart strings. He had his tonsils removed recently and the doctor hit a nerve. He speaks with an impediment but sings absolutely amazing. Nicki thinks he is ready for competition. Mariah was moved by his voice and of course it’s a big yes to Hollywood.

Rachel Hale is a southern belle with a big personality. Nicki loved her tone and control. Mariah is glad to meet someone who knows who they are and what kind of artist they’ll be. They declare her happiest contestant ever and send her to Hollywood.

Matheus Fenandez is the last contestant of the night and as he puts it, good things come in small packages. His voice is much bigger than the rest of him and he sang a Sam Cooke song to perfection. Keith thinks he has a unique voice and Nicki thinks he fits the bill. He is crying because he is so happy and the judges are accepting and valuing him. He makes it to Hollywood where he’ll join everyone else that made it.