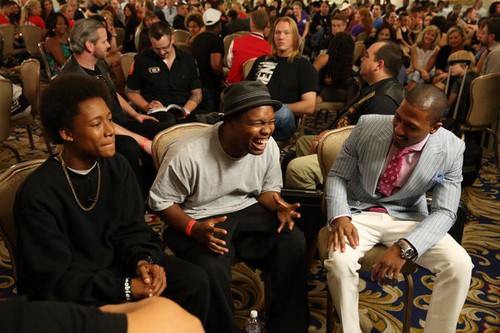 Tonight on NBC their hit reality talent show AMERICA’S GOT TALENT continues and the remaining performers give it their all to make it to Radio City Music Hall. Did you watch last night’s episode? We did and we recapped it here for you.

On last nights show after weeks of incredible (and sometimes terrible) auditions, Nick and the judges had finally made their way to Las Vegas to choose their favorite contestants of Season 8.  Before the decisions began, Howie outlined the rules: an act will be sent straight to the finals in Radio City Music Hall, they’ll be sent home immediately, or they’ll be asked to audition one more time in an attempt to sway the judges’ decision.

On tonight’s show there will be more cuts.  On last night’s show there were some shocking cuts.  In a change from the previous years.  The groups were split in three groups something a la American Idol style.  One group was immediately eliminated, one was sent ahead to the live auditions and the other group were asked to auditioned again.  Tonight the finale acts will either be eliminated or sent through to the live rounds.

We will be live blogging America’s Got Talent Season 8 Episode 8 at 9PM EST . . . so make sure to come back to this spot and watch the two hour show with us. Make sure to refresh often so you get the most current info! While you wait for the episode let us know how much are you enjoying AGT Season 8.

Vegas weeks continues and it is make it or break it time. The show begins with a montage of acts talking about their dream, how far they have all come and how they will not give up. It is very dramatic and inspiring at the same time.

After the little into is a recap for the previous night’s show and then it is on to day two of the Las Vegas move on or go home round. First up is kid group of Aaralyn and Izzy, who do a kid version of a heavy metal song. It is interesting. Following those two is country cutie Chloe Channell, who is also a child. The girl has talent for sure. Next up is another country singing girl, Genesis Nava, who does extremely well. The last child singer is Ciana Pelekai, she is not a country singer but more of a soul singer with a pretty incredible voice.

The next category is the magic category. First up you have R.J. Cantu who makes his assistant disappear, very old school. Nathan Phan whose joke doesn’t make sense dispite the magic he does. Next up is teenager Collins Key who does his magic at the judge’s table with their participation. He makes a page disappear out of a book, with the power of visualization kind of cool but not sure it is Radio City Hall worthy.

Then there is Ariann Black, a female magician, who with her assistants puts on a magic performance that goes wrong. It was not a trick really or if it was, it was bad execution. Next up is illusionists Leon Etienne and Romy Low who pull off a pretty cool illusion of her being suspended in the air. Things get very tense though when Howard asks them who in the category should be sent home and Romy says Ariann slipped up. That does not fly with Ariann who insist she did not slip up, drama in the world of magic.

Next up is the variety category and it kicks off with a guy who calls himself “Special Head”, He who bends himself backwards and the knees, levitating himself almost. It is neat but umimpressive. Immediately following him a dancer Kennedy Davenport who puts on a upbeat and unique routine. Then you have Megan Piphus and she is a ventriloquist, that sings. She does ok. Finally there is the guy duo of Lil Mike and Funny Bone, who are brothers. These two are rapping dancers that fail to really impress anyone when Lil Mike forgets the routine. The judges immediately send them home.

The male singers take the stage next and it is a tough category. Dave Fenley gets the category started with a very soft country song he does ok. Following him is another countryman, old-timer Marty Brown who does a great version of “When You Say Nothing At All”. Then you have Paul Thomas Mitchell singer and guitar player who is has a very unique sound that is kind of a soft rock kind of sound. Next up is classical singer Jonathon Alvin, who doesn’t actually sing a classical song. In fact is voice is more opera like then classical I would say. He sounds awesome though and is a change from the other three. Travis Pratt, who too is a opera singer, attempts to impress the judges next. You may recall he proposed to his girlfriend during the New York Auditions.

There are cheers and tears as acts find out their fate. The montage of the acts being told plays out. There were too many to individually point out so you will just have to tune in next week when 60 acts beginning the battle to become the winner of America’s Got Talent. The live show begins next week.