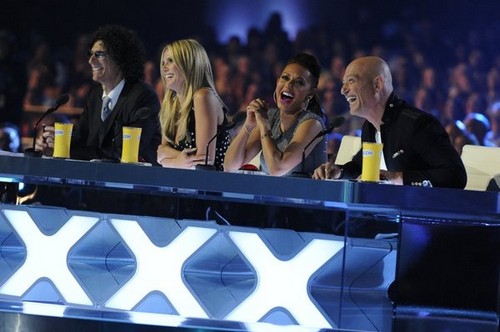 Tonight on NBC their hit reality talent show AMERICA’S GOT TALENT continues and on tonight’s show the 12 most talented acts in America battle it out for the $1 million prize..   Did you watch last night’s episode? We did and we recapped it here for you.

On last week’s show multiplatinum-selling rock band Fall Out Boy performed their hit single “My Songs Know What You Did In The Dark (Light Em Up). Season six finalist iLuminate gave an electrifying performance during the broadcast.  Then we got to see the 12 finalists chosen. The final 12 are: Branden James, Cami Bradley, Catapult Entertainment, Chicago Boyz, Collins Key, D’Angelo and Amanda, Forte, Innovative Force, Jimmy Rose, Kenichi Ebina, KriStef Brothers and Taylor Williamson.

REC AP: The first act of tonight to perform is the Chicago Boyz, they amazed the judges with their last performance where they were called a worthy Vegas act. They are determined to make it to the top and want to prove you can always succeed in the things you work hard in.

Mel B says she loves everything about them and says there were a few mistakes but they deserve to be there. Howie tells them they are the best of the best but had a few flaws tonight and he loves them. Howard says tonight is interesting because it’s a night of nerves; they’ve made it this far in the finals and they are still phenominal
performers. Heidi says they started the night very great, they are an positive act that makes her smile.

The second act performing for a place in the finals is Brandon James, he was so shocked to have made it this far in the competition and was prepared to lose much earlier on. His parents are there tonight to watch him live, he believes he has so much more to give to America and he has to prove he belongs here.

Mel B says she was so impressed with how he owned the song; he was so graceful and his voice deadly. Howie says that the song choice was amazing; he grasped America with his voice. Howard says it’s a huge difference the song makes, he connected and felt he though it through very well connecting with the audience. Heidi says that he has a beautiful voice and was better than last time.

The third act performing tonight for a place in the finals is Innovative Force; they are amazed to have made it in the top 12. They feel like they are more dedicated to doing what they do now, they love their coaches and appreciate how they’ve helped them so far. One of the girls actually got hurt and had a sprained foot; they are ready to show America what they have.

Howard says they are adorable and are fun to watch; he believes that they were wise to add more dance and trampoline. He fears that even if they’re good, there might be six acts better than them. Heidi says that they worked so hard and they have the biggest fan club in her house; they are an inspiration to many girls. Mel B says that this week she was worried for them because last week was messy but this week was their best performance yet. Howie says that it was
entertaining, he just loved it so much.

The fourth act performing tonight is The Kristef Brothers, they thought auditioning was enough of a dream. Thy were so happy to have been inspired to do this and really want to impress all of America.

Heidi says that she loves them and just keeps standing and clapping; they are hilarious and thought the end kind of looked like a mistake but she doens’t care. Mel B says they are so entertaining and wants to see so much more. Howie says he loves them and everything they do, it was like a Richard Simmons tape on steroids. Howard says they do the
incredible week after week; he loved how their sketch was like a Saturday Night Live sketch; it was funny and believes they are going through to the finals.

The fifth act performing tonight is D’Angelo and Amanda; they were so nervous being on the stage and to actually get through. D’Angelo wants to win for his father; he inspires him and also Amanda a ton in their dancing.

Mel B says they just nailed their performance; the energy and power was so amazing, she just loves tonight. Howie says they are bringing it and they ramped it up so much; it’s going to be America’s hardest night for voting. Howard says any other season of America’s Got Talent they’d be crowned the winners but there are so many good acts this year that it’s hard to say. Heidi says some of the movies were repeated but it’s so impressive what they do; she loved their energy.

The sixth act of the night is Catapult Entertainment, they believe they tried to do too much last week and had the judges were confused. They believe they have created the most powerful piece ever about a child fighting a monster.

Howard says that he loved them from the beginning and they finally got back on their game with the simple story this time; he liked how it showed a solution to bullying and they are going through in his opinion. Howie says that he loves how they make clear stories and loves the concept of bullying as the story. Heidi says loved the messae told and they are back. Mel B says it was magical and would love to do what they do.

The seventh act performing tonight for a chance in the finals is Forte, they really can’t believe how all the judges stood up for them with their last performance. They love how people regconize them on the streets, they are all from different backgrounds and they believe it’s what the world needs right now.

Howard says that they always pick the right song and they haromonize so amazingly; he believes they are surely going through without a doubt. Heidi says that they sing like true professionals and doesn’t know what to say. Mel B says they are deffinatly going through and will be angry if they don’t. Howie says it’s amazing that three talented men brought the evening to such heights with a song about a sicking ship; he wants them to be voted through.

The eighth act for tonight is the comedian Taylor Williamson he’s so surprised that he’s been put through this far; he’s also happy to perform for Howie since he was the first stand up comedian he’s ever seen live.

Heidi says that it was really funny and that he’s growing on her. Howard says he hopes people vote for him and is excited he’s here, he wants him to be part of the final six and loves his edgy material. Howie then says that a comedian is something very difficult; he just loves his character so much. Mel B is left saying nothing.

The ninth act up tonight is Collins Key, his last performance was to get a girlfriend but she had a boyfriend. Collins almost quit magic because of peer pressure but his parents told him to do what he loves, he would love to win the show and be the youngest magician.

Mel B says that it was well done and love how Howie couldn’t read the watch. Howard syas he loves magic but it dragged out a little long and some people lose interest.

The tenth act of the night is the talented Kenichi Ebina; he’s not an emotional guy and his wife tells him he doesn’t express it enough and that’s what this weeks performance is based on, he’s doing something more artistic and risky but will be beautiful if his vision works.

Mel B says that it’s crazy, she has no idea how he does these amazing acts that look so beautifully; it was entertaining and flawless. Heidi says that it was really intense and felt like watching him have a heart attack and dying; it was so beautiful. Howie says that Kenichi is the man America should vote for; from comedy to something so
emotionally moving. Howard says he’s Kenichi’s fan for life, he took something big to something much smaller; it’s brilliant and loves what he does and expects him in the top 2.

The eleventh act coming up is country singer Jimmy Rose; in his first audition he was happy to have his mother see him then. She inspired him to become a singer, he has loved music ever since seeing her in church.

Howie says that tonight has the best acts ever, he thought he was great but wasn’t a wow moment. Mel B says that he is more confident than ever, she loved him and she grew on him. Heidi says that it wasn’t her favorite act of the night but he did give it all. Howard says he likes his singing and agrees with Howie; it just wasn’t too special.

The last act of the night is Cami Bradley, she believes it’s sureal being where she is now and it’s incredible. She was so excited America wanted more of her, her dad was her biggest inspiration and made her who she is. He’s proud to see everyone finally get to see Cami for who she is; he’s in the audience tonight and she’s ready to show America
what she can do.

Heidi says she did it again, she took an iconic song and made it her own. Mel B says last week she wasn’t a fan but tonight she turned it right around and the song was performed beautifully. Howie says that she is a star and is like an angel, he has a judge/contestant love on her. Howard says that she makes songs her own; he believes she has to go through.