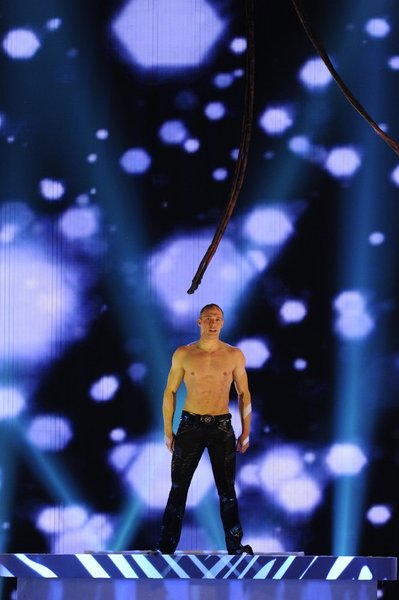 Tonight on NBC their hit reality talent show AMERICA’S GOT TALENT continues and the final 12 semifinalists performed last night, but only six of them will move on to the finals.   Did you watch last night’s episode? We did and we recapped it here for you.

On last night’s show the competition was fierce and the final 12 semi-finalists perform live at the legendary Radio City Music Hall for the chance to win one million dollars and become the most talented act in America.  My favorite act of the night was Timber Brown.  The took the stage with another intense, death-defying stunt performance hanging high above a giant pool of water.  Howie and Howard hoped that the viewers realized how the water element enhanced the danger, but Mel B thought the performance was magnificent and so did I.

On tonight’s show after some incredible performances last night tonight we will find out which 6 semi-finalists move ahead to the finals.  Also on tonight’s show multiplatinum-selling rock band Fall Out Boy will perform its hit single “My Songs Know What You Did In The Dark (Light Em Up). Season six finalist iLuminate will also give an electrifying performance during the broadcast.

We will be live blogging America’s Got Talent . . . so make sure to come back to this spot and watch the one hour show with us. Make sure to refresh often so you get the most current info! While you wait for the episode let us know how much are you enjoying AGT Season 8 and the semi-final rounds.

On tonight’s episode of America’s Got Talent it’s time to whittle the cast down from 12 semifinalists to 6. The first ten minutes are flashbacks to all contestants and their performances and then Fallout Boy takes the stage to perform. Light Em’ Up is a great song for this group and I think they always sound good live so of course this is great.

The first elimination is up and it’s America Military Spouses Choir, Branden James and Timber Brown. Branden makes it into the next round. The next result is between Chicago Boys and Kristef Brothers. America pushes both into the top 12.

Marty Brown and Jimmy Rose go head to head and the one closer to winning a million dollars is Jimmy Rose. There are only two spots left and Kenichi Ebina grabs the first one. Nick Cannon stalls for time before calling the last group to the stage. It’s between Anna Christine and D’Angelo and Amanda with the judges having to choose who will go through to the semifinalist round. Heidi chooses D’angelo and Amanda as does Howie. Mel B and Howard pick Anna Christine. Home votes from last night pushed D’Angelo and Amanda into the top 12.