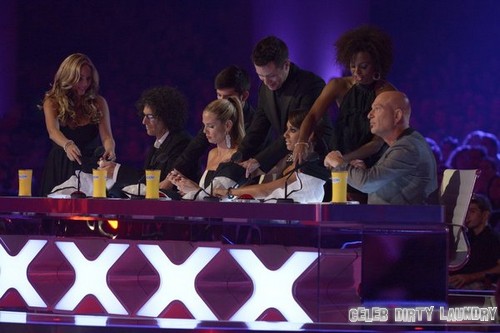 Tonight on NBC their hit reality talent show AMERICA’S GOT TALENT continues and the final 12 semifinalists take the Radio City stage to battle for a spot in the finals.  Did you watch last night’s episode? We did and we recapped it here for you.

On last week’s show the first 12 semi-finalists performed live at the legendary Radio City Music Hall for the chance to win one million dollars and become the most talented act in America. Six of those acts moved forward to the top 12.  We are down to the end the first finalists have already been chose.  the six acts who have made it through so far are: Innovative Force; Forte; Collins Key; Taylor Williamson; Cami Bradley and Catapult.

On tonight’s show the competition is getting fierce and the final 12 semi-finalists perform live at the legendary Radio City Music Hall for the chance to win one million dollars and become the most talented act in America.

RECAP: The first performance of the night is the young salsa dancers, D’Angelo and Amanda.

Mel B says that they are amazing at dance and have amazing technique; she felt the routine only worked for her when they hit the water. Howie says that they have to step it up, their last routine was much better and they did not do as well. Howard says that they did up their game, he says the water is very slippery and they danced through it very well and tells Howie to shut up. Heidi says they were firece and loved the performance, the outfits and the splash at the end.

he second performance of the night is Marty Brown who had a very bad time in his last performance and it shocked the judges. He compares himself to Rocky; he lost the first time but in the second movie he comes back and wins.

Mel B says to Marty that it was a lot better than last time they saw him but there were a very few little quivery notes that weren’t that great. Howie says he proved him wrong and that he can handle the pressure; there’s another country singer. Heidi says it was one hundred percent better but tonight has a lot of amazing acts and believes it will be tough. Howard says that he did better and loved how he played to the audience; though he said it was a safe song.

The third act of the night to perform on stage is the Chicago Boyz who had a member get hurt very badly by breaking his tibia; who’s crushed he can’t do his dream.

Howard says that none of them broke their leg and was disappointed and believes they did him proud, he says these guys never disappoint and did some amazing new tricks. Heidi says that are truly inspiring and loves watching what they do; there is so much going on and the energy is amazing. Mel B says that she didn’t think they’d pull it off but believes it was off the hook, she was impressed that Howie was clapping. Howie says it was amazing and loves what they do, it was one of the most exciting thing they have seen at night and they are a headline act.

The fourth act to perform tonight is Howard’s wild card pick and it’s the illusionists Leon and Romy, they are going to do a bunch of tricks and there’s a lot of room for error; they are here to prove Howard right.

Howard says that he was really glad he brought them back, it proves a point because of how drawn out the last act was but this time it was just pure magic. Heidi says they wowed her, it was visually stunning and how there was several beautiful girls coming out of boxes. Mel B asks how they do it, she says it was proper magic and they deserve to be there. Howie says that he wants to give a standing ovation to Howard because he made the best wild card choice. Howie and Howard then give a kiss to each other; it was really awkward and the two are disgusted. Howard then goes and kisses his wife, then Howie gets a kiss from her as well.

The fifth act of the night to perform is now Anna Christine; she went off time in her last performance and really wanted to cry and run off the stage.

Mel B says that they are talking now and believes all the singers in the competition must be scared; she’s 11 years old but so fantastic. Howie says that it is amazing and a terrific sound. Howard says he can’t even believe how amazing she is; he was nervous for her at first but would love to hear her sing with Bon Jovi and will call him out on the finale. Heidi says she has a sneaky suspicion that she has the best voice of the night.

The sixth act performing tonight is Kenichi Ebina who amazed everyone with his last performance; he always thinks of his next act and uses many things that inspire him in his life. He’s nervous because of how big his last act, he says he’s going to go smaller and smaller but good.

Howie says he’s amazed and believes that Kenichi is the biggest talent in the world; it’s a variety show, he’s a comedian, and actor, a mine, a writer and an artist. He does so much and begs for people to vote for him and he should win. Howard says that he has no idea how America is going to figure it out tonight; he believes it’s the strongest semi-finals of all time. He can’t even critique his performance because it was beyond amazing. Heidi says that Kenichi is elevating dance to a whole new level and calls him a genius. Mel B says it’s mind blowing everything he does and wants to see his show in Vegas.

The seventh act of the night is comedian John Wing, he’s been on stage several times but loves being able to perform again on the show.

Howard says he did enough and is a pro, you can tell he has amazing stage presence and great material with amazing one liners. Heidi says she likes him and believes he’s every mans man and is very relatable for all married men. Mel B says that he’s spot on, she really hopes America votes for him. Howie says that this is the night, he does his comedy well and effortlessly.

The eighth act of the night is Branden James, he’s amazed to have made it through. Since being on the show parents have told him how important it is to reconnect with their kids and he’s glad to have inspired them.

Heidi says she’s literally sweating with him and was amazed at his high notes, she loves him and says he does a fantastic job. Mel B says she thinks the camera really loves her and believes he looked extra cute. She hopes people vote for him tonight and loved his twist on the song. Howie says the competition tonight is mind boggling and believes he’s great but there are so many amazing acts that he has no idea who’s going through. Howard says that there’s no doubt he has the most powerful voice in the competition but felt like he didn’t love that song; he had the power but not the passion.

The ninth act of the night is the Kristef Brothers who were supposed to perform last week but one of them hurt their neck really badly. The two still did training even though his neck was hurt; they did not fall behind.

Heidi is laughing at their tight pants but says they have proven the got what it takes; she wants them to win this after seeing their performance. Mel B welcomes them back to the competition loving their strength and comedy together; she was so entertained and would take her kids to see them any day. Howie says it was amazing, especially the chair part. Howard says they have taken the traditional act and remade it with their amazing comedy; he believes America is going to have a hard time voting.

The tenth act to perform tonight is the American Military Spouses Choir; a group of woman who have husbands in the army. One of their leading singers isn’t there because she had a baby girl and has also served in the forces herself.

Heidi tells them it was very powerful and loves what they stand for; she thought the song choice was perfect and loved their voices. Howie says the thing is that they have to judge them on what they did, he says they’re lovely. Howard says they have a beautiful story and felt the performance was pleasant but not as good as some of the other acts tonight. Mel B says the competition is really tough and they got amazing singers; she tells them they did really good but didn’t believe it was good enough.

[10:48:31 PM] Chris: The eleventh act of the night is Timber Brown; he amazed judges with his high sky performance; he believes he has a success story and like to inspire kids to be their own superman.

Howie tells him he saw him get tangled up a bit but saw the danger and how he has nothing protecting him from getting harmed; he believed he delivered but doesn’t know if the viewers felt the same. Howard says that the danger was up and he had to do this with water but still believed it wasn’t as exciting as his other performances. Heidi says she loves him but didn’t feel the act did him justice. Mel B says they are nuts and said she felt it was magnificent; she knows how dangerous it is and it was very intense.

The last act of the night is the country singer Jimmy Rose.

Heidi says she thinks he sings from the heart and loves that about him; she believed tonight had so many great acts and it’s going to be very hard for him. Mel B says when he started singing she wasn’t pleased but when she listened she heard his emotion. Howie says that he did a good job but he has so much competition that it’s going to be tough. Howard says people like him very much and a lot of people vote for the underdog, but as a singing performance he thinks it was nice but didn’t feel the passion.