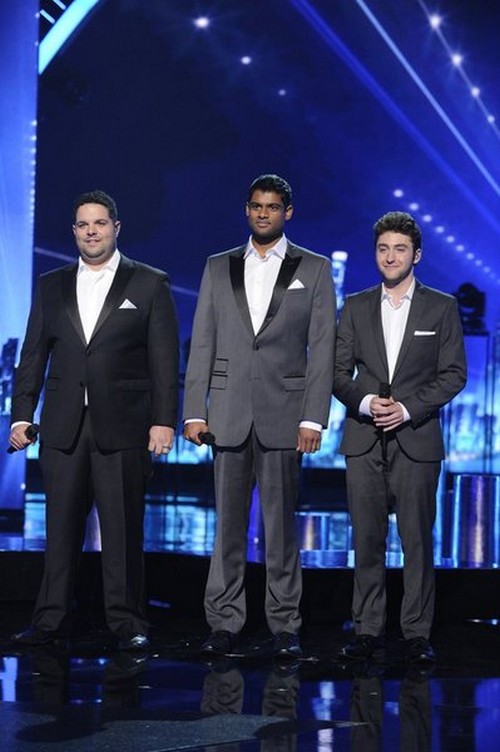 Tonight on NBC their hit reality talent show AMERICA’S GOT TALENT continues and twelve semifinalists take the stage again, but only some of them will be moving on to the finals for a shot at $1 million. Did you watch last night’s episode? We did and we recapped it here for you.

On last night’s show the first 12 semi-finalists perform live in front of the judges and there were some outstanding performances. BUT, the performance of the evening was the last act of the night. Forte the opera group of member who really don’t know each other, they are very different men but share the same love for opera. The group sang, “Unchained Melody” and they blew the audience away. Heidi said wow and nothing else. Mel B said that she has changed her mind; she really bloody liked them. Howie said they solidified a place for themselves in the quarter-finals and believed they sent Jonathon Allen home. Howard said that from the opening notes they had him, the pressure of the semi-finals got to everyone but not them; they moved the audience perfectly.

On tonight’s show the votes are in and six acts from the previous night’s performance show move on to the next round of competition. Global superstars One Direction will perform “Best Song Ever,” the single from their highly anticipated new movie “One Direction: This Is Us.” The Voice winner and chart-topping singer Cassadee Pope will also perform on the live telecast.

RECAP: We have a recap of last night and how the judges and the contestants were feeling on the night of their performances.

Heidi says she hates elimination night having to see so many talented contestants having to leave; we now take a look into the Orville lounge; Nick is walking around and chilling with all the contestants.

Nick is now chilling with the contestants in the Snapple lounge and is talking to them about their acts and how they are doing. Next up is Cassidy Pope performing her new single Wasting All These Tears.

The wait is over, the first elimination is coming up right now; stepping up is Innovative Force, Tone The Chiefrokka and Red Panda. The act moving un to the top 12 is, Innovative Force!

The next results is bringing up Duo Resonance, Jonathon Allen and Forte. The winner to be joining Innovative Force in the top 12 is, Forte! Good, I like those guys a lot.

Howie says that Forte are going to win the entire competition; but then says that Kenichi is still his personal favorite.

The next result is up, coming to the front is Angela Hoover, Taylor Williamson and Collins Key. The act moving on to join the other two in the top 12 is, Collins Key.

Collins promises to show magic that they have never seen before; Mel B says she is happy that he’s going through and they ask about his date. She had a boyfriend so he just hung out with her and had a great time.

Taylor says thank you to everyone for voting for him and gives a shout out to his TayLords; he asks Heidi if she’s his fan now and she gives him the thumbs up. Howard says that he believes that Taylor has a likeable character and has real material and that’s why he beat Angela Hoover; he believes that he’s a great comedian.

Next up is One Direction playing their newest single “The Best Song Ever”.

Howard says that his wild card pick to bring back for the show is Leon and Ronni. The acts left are Catapult Entertainment, Dave Finley and Cami Bradley; the person that America put through is, Cami Bradley.

Cami says that he is blown away and appreciates the votes; Howie says that she has a beautiful and haunting talent, he believes she is a star.