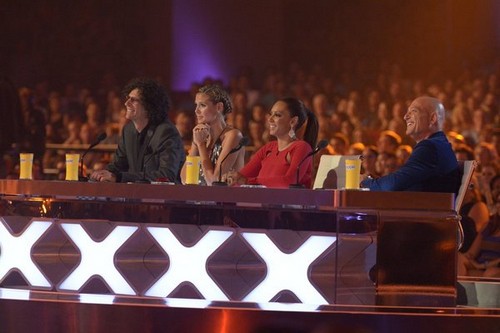 Tonight on NBC their hit reality talent show AMERICA’S GOT TALENT continues and on tonight’s show we will find out which of the 12 talented finalists will move one step closer to the million-dollar prize? Did you watch last night’s episode? We did and we recapped it here for you.

On last week’s show the top 12 finalists performed live at the legendary Radio City Music Hall for the chance to win one million dollars and become the most talented act in America. Nick Cannon hosted this variety competition series which features a colorful array of performers hoping to be named the most talented act in America.  The standout performance of the evening was Forte who performed an incredible rendition of Celine Dion’s “My Heart Will Go On.”  The judges have nothing to say except that they’re sure Forte will be back next week.

On tonight’s show the votes are in and six acts from the previous night’s performance show move on to the final round of the competition at the legendary Radio City Music Hall.  Performing tonight are two of “AGT’s” most popular winners, Terry Fator and Olate Dogs.

RECAP: We get a recap of what happened last night, we see some of the semi-finalists sign autographs as they arrive. We see how contestants felt towards each others acts in the back room, all the acts did well last night and nobody is sure to who will go through.

Nick asks Howard if it was easy for America to choose the top 6, Howard says that any of the acts they put through could have easily been in Vegas without a doubt. We see what’s popping in the Orville lounge and how all the contestants are having a good time with Nick Cannon.

Nck Cannon introduces the winners of the Snapple viewing party and they all say they want Kenichi Ebina to win the show; Tom Cotter introduces the Olate Dogs who were contestants on the show last year.

Nick Cannon is out in the streets trying to find talent for season 9, he finds some guys doing tricks with pogo sticks, a beat boxer, break dancers and even an old guy dancing.

The first elimination is on its way, coming up first is Chicago Boyz and Kenichi Ebina. The act going through to the finals next week is no other than Kenichi Ebina! Chicago Boyz say that the experience was amazing and they enjoyed themselves; it’s been the best times of their lives. Kenichi says that he feels like he can fly; Mel B says it’s sad they have to go and their slip up wasn’t the problem. She is very pleased to see Kenichi going through, you could also see Howie start cheering when it was announced.

Nick has us view the party in the Snapple center and everyone is really happy for Kenichi Ebina getting through to the finals. Coming up is the winner of season 2 of America’s Got Talent; Terry Fator.

Terry Fator says his life changed after winning, he wishes all the contestants the best.

We take a look at a video showing off all the acts and how winning America’s Got Talent means everything to them.

The next two acts up for elimination is Kirstef Brothers and Taylor Williamson; Howard says that honesyly both of the two acts have to go through and neither deserve to go home. The third act going on to the finals is Taylor Williamson! Kristef Brothers hug Taylor and say they have had an incredible journey and thank the judges, America and the audience. Taylor says thank you to everyone who voted for him and kids who get bullied for being different, that it’s cool and that is why he’s there now. Howard says that he is so happy to see Taylor go through but sad to see the Kristef Brothers leave.

The next acts going up is Forte and Brandon James; Howie says they are equal but gets a slap on his head from Mel B because someone on Twitter told her to do it. The act going on to the finals is Forte! Brandon says thanks to his employer for being supportive of him and America for helping him realize his dream; he then thanks all of his family and can’t wait to get home to see his loved ones.

Forte says they are so amazed and didn’t expect to go so far from when they first auditioned.

We take a look at the Snapple viewing party and the party is going crazy for Taylor and Forte!

The next acts up for elimination is D’Angelo and Amanda and Jimmy Rose; the act moving on to the finals is Jimmy Rose. Jimmy says that he never dreamed he would ever go through; he then gives a blessing to all those today on September 11th. Mel B says he has grown as a performer and an artist; being humble and talented is what he is.

There’s one spot left, the two acts left is Catapult Entertainment and Collins Key; the act going on to the finals is Collins Key. Collins says thank you to everyone voting for him and AGT in general. Howard says that Collins has to be faster with his pacing but congratulates him.