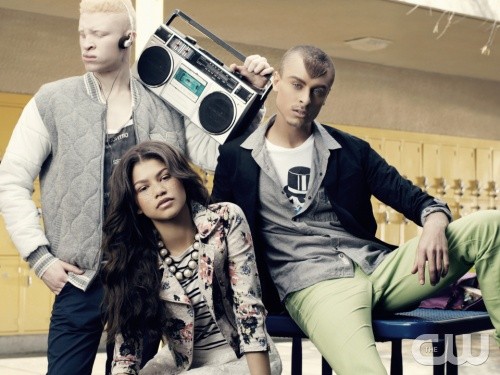 TGIF CDLers! Tonight on the CW Tyra Bank’s reality show AMERICA’S NEXT TOP MODEL returns with a new episode called, “The Girl who Gets Punked.”  On tonight’s show the girls and guys struggle to get along.  Did you watch last week’s episode? We did and we recapped it right here for you.

On last week’s show NEVER-BEFORE-SEEN FOOTAGE OF THE GUYS AND GIRLS EDITION — Behind-the-scenes confessions, flirtations and meltdowns among the guys and girls were revealed in the never-before-seen footage.

On tonight’s show the models get tested at a commercial shoot to do ridiculous requests with a fake director played by comedian Reggie Watts. At a “flawsome” photo shoot, which highlights flaws to show they are beautiful, one of the models can’t focus because of a fight between the girls and the guys in the house.

A male model is allowed to come back. Tyra left her fans hanging for two solid weeks but finally is here. Sorry Mike’s fans. He had the lowest social media score and thus will not be returning. The man with the highest score is unsurprisingly Jeremy. His fans did love it whenever his shirt came off. Well his abs just won him another week to compete.

Still there is some grumbling. Jourdan didn’t like the fact that two people came back much less one of them being Alexandria. She’s a big competitor. Then there is Jeremy who always finds a way to annoy her. Something he seemingly perfected once he got over his little crush. To her his behavior only reminds her of her ex-husband. That guy liked to play and mind games and she feels like it’s a sequel with Jeremy.

Now the rules for winner of best photo allowed Chris to enter the Guess Closet. Instead of choosing Nina, he went with Alexandria. Nina admitted after some tears that she and Chris just aren’t were they used to be. And because of that she ended up missing out on the closet.

Kelly tells them today’s challenge. The model will be auditioning for a commercial. They have to do their best with only a green screen and the most bizarre props. Unbeknownst to them they don’t realize that this is all a test. The judges are testing out how well the models can follow ludicrous directions and still manage to sell the product.

For the most part the models do what’s asked of them. Chris tends to take it too far but he thought it was a real commercial and he just wanted to make a great impression. No, the real problem came from Renee. She has irrational fear, her words, of big full body character costumes. When she saw a stuffed camel head, she was reasonable frightened. People can understand and yet at the same time not want to put up with her phobia if this were a real set.

Shedoes her best to carry on and the director/ an actual comedian gave her props for that. Later the contestant s can all laugh it off when they realize it wasn’t a commercial that was a challenge. They stop laughing though when Jourdan is revealed to be the winner.

Back at the house, simplest thing suddenly turned into a guys vs. girls war. Chris saw dirty dishes in the sink that had been there for a while so he wrote a note to the offenders. He started it when it wrote in the note to Renee calling her “ratchet ass”. Renee to exception to that and they began arguing. Then when other joined in including Jourdan who brought up “love”, Jeremy felt he should stick up for Chris and began to insult Jourdan on her marriage.

Everyone got separated before the fight became physical and after hearing some wise words from Cory, Jourdan went and apologized to Chris H. and Jeremy apologized to her. Everybody was cool and Renee stayed in her room. Fighting is not what they came there for. By the next day they go back to being professional.

What’s their next assignment? They have to do a photo shoot with Disney star Zendaya and supermodel Shaun Ross. Throughout the days’ work each of models have to experience showcasing a flaw that’s not even necessarily their own. Renee for example got to rock a large forehead ala Tyra Banks. While Chris H. struggled with his attempts to rock a gap. He kept getting stuck in his own head.

Jourdan suffered as well. During her shoot Jeremy came in to watch and that put her on edge. She became too stiff on set. Even Alexandria became stiff. They all put too pressure on themselves that they may have ruined their chances of staying.

All three did get bad feedback from panel. Jourdan and Chris H. took the criticism and all Alexandria could say is that she doesn’t feel well. She’s not lying but at the same time the judges don’t care. Sick people stay home and leave the models that can handle the pressure to stay in the competition. That’s why social media basically abandoned her this week.

Nina comes in first place. Although she won’t be happy seeing as the bottom two is Chris H. and Alexandria. Luckily Chris was saved by social media but Alexandria who only recently came back must now go home. Sick people don’t get the sympathy vote anymore. And she never got the chance to go to Bali.