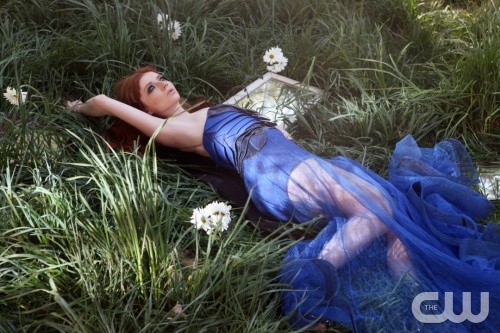 TGIF CDLers! Tonight on the CW Tyra Bank’s reality show AMERICA’S NEXT TOP MODEL returns with a new episode called, “The Guys and Girls Get Flirty.”  On tonight’s show we get to see some footage that has never been shown before.  Did you watch last week’s episode? We did and we recapped it right here for you.

On last week’s show two of the models got overly confident, but ended up booking no runway shows, which shattered their self-confidence. One of the girls got distracted at the photo shoot because of her crush on one of the guys and, in a twist, two of the eliminated models got the chance to come back to compete.  Chris H. won best photo, the runner up was Nina.  By the end of the show Phil at the lowest score, but Tyra told him he had a chance to come back to the show as well as all the other models that were eliminated.  Tyra announced the girl with the highest social media scores would be back.  For the girls that was Alexandra and for the boys well we need to wait until tonight…

On tonight’s show NEVER-BEFORE-SEEN FOOTAGE OF THE GUYS AND GIRLS EDITION — Behind-the-scenes confessions, flirtations and meltdowns among the guys and girls are revealed in the never-before-seen footage.

When Tyra allowed ANTM to become co-ed then the audience should have expected the drama but 9 episodes in and viewers want to know if there was more they weren’t seeing. Tonight’s episode is a long awaited look behind the scenes. At the start of the competition the 35 men and women was always going to be a start of some flirtation. But what you didn’t know was at the first panel the models were already competitive. They hosted a backstage catwalk. There was even a Tyra impersonator. Cory did a marvelous job.

The first night at the house became the flirty moment number nine. Jeremy was crushing on Jourdan. So the moment he found them alone (minus Cory) at the hot tub he tried to make his move. Too bad he found out she had a boyfriend.

As we all know Phil is a bit of the crazy one. Well there was an awkward moment when Phil was imitating a certain someone’s lisp when he was goofing around. However dum dum duuuum the man he was impersonating just happened to be standing behind him. Luckily Phil was able to pull it off with his humor and charm and no one got upset. But that was a close one.

Top flirty moment number 8 may come as surprise. Remember when Mike was super stiff on the runway. He was feeling really low and someone simply had to offer up their shoulder. Namely Cory. He was doing best to make Mike feel better and If someone hadn’t ruin the mood he could have don so much more.

Top Flirty moment number 7 is Bianca and Marvin. Marvin had a condom that was running o it’s expiration date. So he had to ask all the ladies and Bianca more than once who would help him use it. That didn’t work and is probably why he still had a condom close to expiration. Don’t the things have a good year on them!

Mike and Bianca reaches in at 6. Where Marvin continuously failed with is muber one crush, Mike was able to score or so everyone thinks. Facts: The two kissed and woke up in bed together. Cory thinks they at least made out but Bianca denies anything happened. Someone is mistaken but who?

What else didn’t you see? Did you know Rob Evans stopped by the house with Cycle 19 winner. He did and the reason why is because he wanted to get the contestants in healthier conditions. One problem with that. Everyone was asked to jump if front of others and Chris H. couldn’t handle it. He quit and then pouted his way on the sideline.

Some people can’t take embarrassment. Good thing that Marvin could. During one photo-shoot he got a bit carried away delivery chemistry with Clea. He got a hard on and when the judges brought it up he tried to play it cool until Tyra tried to reassure him than many have done it before by physical going up to him to demonstrate. Poor Marvin got another hard on. Well what do you expect when Tyra throws her chest in his face?

There were many moments that a man simply couldn’t control himself. Like with Jiana and Phil. Those two are close friends but when Jianna invited him into the bath tub and another girl there was only two responses she could have gotten from Phil. Either he joined or he’d joke his way out of answering.

Phil has a thing Joudan though. She thinks he’s hating because of her high scores. That’s how she explains him watching her through the window with lots of comments. Hate to see what she would think of a real stalker.

Then there was a game of truth and dare. It was mostly dares and most of them were about kissing. All except Marvin. Starvin Marvin was one of the few that didn’t get the dare he wanted. While Chris H. had to say Kill, F*ck, and Marry. Don’t know about marry but he’s both Kill Jourdan and screw her before killing her.

As the competition got fierce so do the Men Vs. Women battle. They had begun pranking each other. At first it was harmless. Some taping clothes here and some throwing tampons there. But then the guys knowingly took thing too far. They knew two of the girls were terrified of clowns and so they put a few around the house. Kanani was completely freaked and later her photo-shoot sent her home. Apparently when jokes send people home then everybody got something to say. Jiana was reaming out the guys when the fight became between her and Marvin. He felt one apology should be enough and then let it go.

Did that stop his crush? No but he never got his make-out session before she got sent home. That’s ok. He bounces back fairly quickly. This time though he may actually have a chance. He’s crushing on Renee and she returns those feelings. She was completely thrown by her own thought that she even went to Jourdan for advice.

Another shocker was when the contestants met a psychic. The psychic was to do a profile reading on all of them. Jourdan was able to let her guard down. She has a fear of men. A part of it has to do with her dad and the other with her ex-husband. Jourdan had never let her guard down until then. Good for her

And let the good news keep coming. Next week the contestant go to Bali but before they do Tyra has to announce which eliminated guy will be coming back. Who will it be?