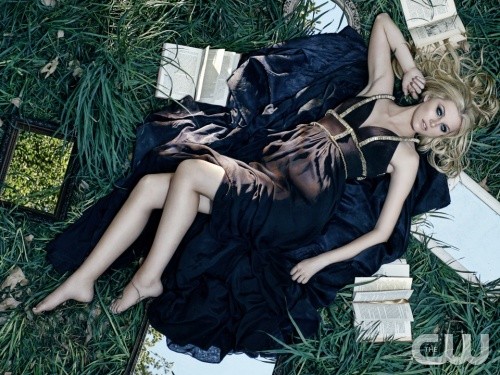 TGIF CDLers! Tonight on the CW Tyra Bank’s reality show AMERICA’S NEXT TOP MODEL returns with a new episode called, “The Girl Whose Walk Is TOO Good.”  On tonight’s show the eliminated models get a chance to return.  Did you watch last week’s episode? We did and we recapped it right here for you.

On last week’s show after a challenge had the models exploring the streets of Los Angeles in their underwear, one of the guys could not take the pressure and broke down. At the photo shoot, where paint was thrown on the models, a few of the models were out of their element and fear it would show in their photos.  By the end of the show Jiana was told she was going home and she collapsed to the stage, Tyra went down and consoled her. Tyra told her to keep her chin up and improve.

On tonight’s show two of the models get overly confident, but end up booking no runway shows, which shatters their self-confidence. One of the girls gets distracted at the photo shoot because of her crush on one of the guys and, in a twist, two of the eliminated models get the chance to come back to compete.

RECAP: Jourdan won best photo last week and it is the third time; no wonder she is feeling on top of the world. Marvin thinks Phil is on the bottom because he has a bad attitude. Jourdan picks Renee to join her in the Tyra suite and the guest closet. In the end, Jourdan thinks Renee is a bitch but she wants to keep her friends close and her enemies closer.

Marvin and Renee are flirting, but she thinks he

is so much younger than her and immature. Renee has a secret, she tells Jourdan that she likes Marvin. Jourdan thinks its hilarious that Renee would even contemplate a relationship because they are here to concentrate on modeling.

The models are going to have the opportunity to participate in a fashion show for Style Fashion Week. First, they have to show what they get to the designers and get some bookings. The model that books the most jobs will win the challenge. Jourdan is really confident, she believes she has the best runway walk. Renee walks in and she sells it, the designers seem to like her a lot. Jourdan is having a rough day, two designers and no bookings; she starts having a melt down. One of the designers thinks Phil is a wiseguy, but he kind of likes that; basically Phil is lucky he got the booking. Marvin also got no bookings.

Renee kills it on the runway, Don did good, Chris H was holding his chin too tight, Nina had problems with her neck, Phil dragged his jacket on the floor and was disrespectful to the designer. The winner of the challenge is Renee and the director tells her that she was incredible.

Renee is so happy, she is finally a threat to the other contestants and gets to enjoy a lot of free clothes from the designers.

It’s nighttime, Renee sneaks into Marvin’s bed to snuggle and he has a little secret, everyone he has liked has gone home, hopefully that doesn’t happen to Renee because she is in the top position now.

The models are at the Canyon Ranch and today they will be wearing couture for the their nature photo shoot. Renee reveals to Cory that she slept with Marvin the night before and unfortunately she cannot focus on anything else today. Nina does well in the shoot, Don struggles. Jourdan picks up a frog and jokes around, throws it at Renee and their is chaos on the shoot.

Renee gives Phil advice to not make his eyes look feminine this week so that he can kill it in the shoot. Johnny Wuek feels like he is getting the same old thing from Phil.

It is Renee’s turn and she is a little cocky during her shoot and Jourdan thinks it is going to get the best of her. Jourdan is next and Cory thinks that the judges have high expectations and if she does one thing wrong she is in trouble. Chris H. is killing it and Johnny tells him he looks hot, Chris H. replies “you don’t look so bad yourself”. Marvin is having trouble and over thinking every moment of the shoot.

It’s time for panel; Nina 9, 9, 10. Don 7,7,8, Renee 7,10,9. Jourdan 9,9,6. Cory 8,9,8. Phil 6,7,6. Chris H. 10, 10,9. Marvin 8,6,8. Time to add the scores together to see who stays and who leaves the competition. Chris H. wins best photo, then runner up is Nina. The next names are Renee, Cory, Jourdan, Don. The final two are Marvin and Phil, one is going home. Phil has the lowest score, but Tyra tells him that he has a chance to get back into the competition. The rest of the previous eliminated models come up on stage. Tyra tells them that the model with the highest social media score will be going back into the competition and that is Alexandra; she will be joining the rest of the models who are heading to Bali. Tyra tells the models that there is also a guy that is returning to the competition, the male model with the highest social media score is…… we have to wait until next week to find out.