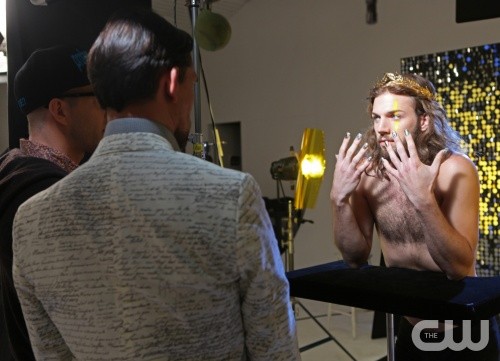 TGIF CDLers! Tonight on the CW Tyra Bank’s reality show AMERICA’S NEXT TOP MODEL returns with a new episode called, “The Girl Who’s Scared of Clowns.”  On tonight’s show arguments amongst the models start affecting their shoot.  Did you watch last week’s episode? We did and we recapped it right here for you.

On last week’s show tensions ran high when some of the models accused another of abusing her power in the house. The guys and girls acted as fashion correspondents in a challenge led by celebrity blogger Perez Hilton. Then, their acting skills were put to the test when they shot a fragrance commercial with a role-reversing twist.

On tonight’s show The guys play a prank on one of the girls, which throws her off her game. At a photo shoot where the models take on the nail art craze, things start to go badly when a few of the models who have become close get distracted after arguing.

RECAP: Marvin decides it would be cool to prank the girls; he gets Jeremy and Don to help tape their clothes all over their room. Renee makes a pact with the girls to stick together and try to get rid of the boys as fast as they can.

The models head to a ranch and meet Jackie Fraser-Swan for their next shoot, its for Emerson. Jourdan is loving the collection, while Marvin is worried because he is on the same team as Jeremy. Phil is panicking and even cut off the sleeves on one of the designers’ shirts; he blames it on having ADHD.  There is a lot of confusion with this shoot because there are a lot of chiefs and not enough Indians. Basically the models are filming themselves. Jourdan feels like this is her time to set things straight so the other girls can see she is not who they think she is. Phil is up on a fence and falls off, he is so angry that he throws a rock at the fence and breaks it and doesn’t impress anyone. The winners are Kanani, Jourdan and Renee. Jiana is upset because her group got a six and Phil hindered their ability to do well. Chris H. is making a big deal about his score and Nina tells him to calm down. Nina and Chris H. get into a screaming match and Marvin tells him to hug Nina and make up with her.

The boys are playing another joke on the girls, this one is clowns that they have hid everywhere and Kanani is terrified of them, she actually breaks out in hives.

It is time for another shoot, the models are going into hair and makeup; this shoot is basically for selling nails and the guys are worried. Chris H. is surprised that Nina is still upset and it is affecting her pose. Chris H. is also doing terrible, but Cory does well. Jeremy jokes with Jourdan and she gets annoyed, she doesn’t like that he openly flirts with her. Jeremy also has a hard time during his pose because Jourdan and he had words just before and looks so insecure. Don feels bad for Kanani because her trauma with the clowns, she couldn’t concentrate on the shoot.