Anderson Cooper Claims The Bachelor is “Fake and Gay” (Video) 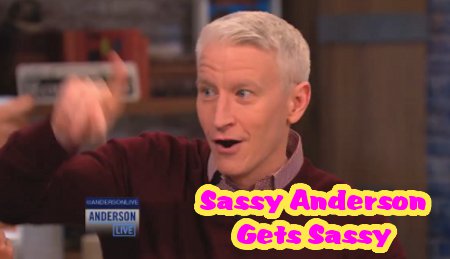 Well, Anderson Cooper basically despises reality television. So, there’s that. On Anderson Live, which I assume people watch, he chatted about The Bachelor and how he thinks the show’s premise, as well as its contestants, are about as ridiculous as the failed couples it produces. He questioned why anybody would get invested in the show, and later made the claim that reality television is “damaging us all.” But, he also admits, that he’s as guilty as anyone for watching the shows. At the end of the day, they’re just ridiculous fun.

He said the series is fake, and lambasted two of the contestants after showing a clip of AshLee and Tierra’s falling out on the most recent episode of the show. And then Sassy Anderson got Sassy. He just couldn’t handle it when Tierra said, “No, [my family] said, ‘Tierra, you’ve got sparkle. You have sparkle. And don’t let anyone take away your sparkle.” Sparkles. Tierra has more than sparkles surrounding her; she also has a whole bunch of crazysauce.

Anderson also joked that some of the past Bachelors might’ve been gay, as he caught many of them checking out Chris Harrison, he quipped. Honestly, I don’t think Anderson is the best talk show host, but at least during this segment he showed a bit of flare and personality. Personally, I’d like to see Kathy Griffin be his permanent co-host. While that would quickly turn into a Kathy Griffin talk show (you honestly think she’d let him speak much?), they have great chemistry together and I think it would be quite successful. Perhaps that relationship should be a once-a-year New Years Eve Special though, huh?

Do you harbor similar feelings toward The Bachelor as Anderson? I’ve been watching a bit of it this year and, have to admit, it does make you wanna barf. But it’s that kind of barf that, after a few minutes of sustaining that urge, you can cope with. And eventually you understand that no amount of barf can take away your sparkle.