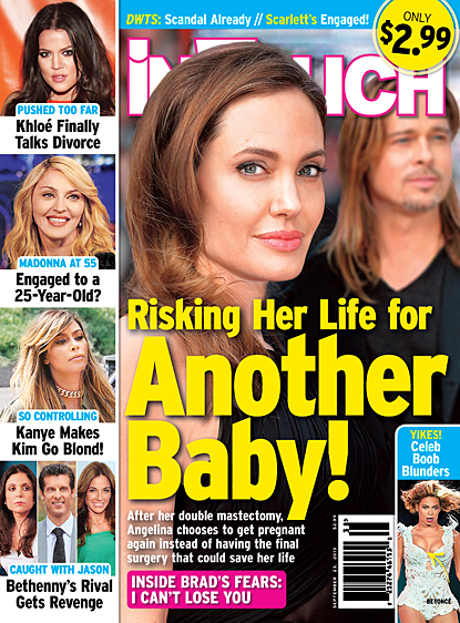 We have heard rumblings for a few months now about Angelina Jolie wanting another baby. After announcing her double mastectomy a few months ago, she also confirmed that she had every intention to eventually have a full hysterectomy as well which would eliminate the possibility of cancer in those regions of the body – something very common for the women in her family. Angie seems to believe that she can wait until she is forty for the major surgery and that gives her just enough time to have one last baby.

According to the Sept. 23rd print edition of In Touch, Angie seriously wants to add to the family one last time before the option is completely taken away from her. Brad isn’t necessarily on board and is really wishing that his fiance would just have the lifesaving surgery so that they could put her medical crisis firmly behind them. It’s interesting how nothing seems to make a woman want a baby more than having someone tell her that her window of fertility is about to slam shut.

Also, in the latest issue of In Touch, you can catch a glimpse of the newly blonde Kim Kardashian. Supposedly, it was Kanye West’s idea for her to revamp her look. Doesn’t Kanye realize that no matter what Kimmie looks like he is still stuck with the same self-obsessed diva and her impossibly controlling momager? Speaking of Kardashians, it looks like Khloe is slowly but surely coming to the inevitable conclusion that it’s about time to pull the plug on her mess of a marriage to Lamar Odom. Do you think that Khloe will finally get up the never to put an end to her marriage soon?