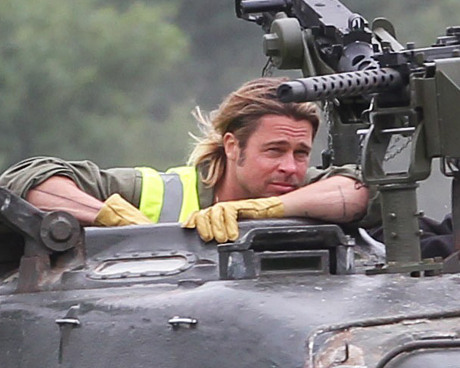 Angelina Jolie is the boss of the house, and Brad Pitt seems to be seconds away from getting bitch slapped by the tattooed goodwill ambassador. Brangelina is every young Hollywood couple’s goal. They’re mysterious, gorgeous, and have enough kids to start a band. While fans assume they’re planning their wedding, the couple has been fighting like Mr. & Mrs. Smith over Scientology! I guess Will and Jada Pinkett-Smith aren’t the only Hollywood couple disregarding Leah Remini’s warning against the cult-like church.

Angelina blames Giovanni Ribisi (Ted/Avatar), their neighbor and Hollywood Scientologist, for trying to turn Brad out. Sources close to the situation told Star Magazine, “In early August, she flipped out on him after finding some Scientology recruitment brochures, probably left behind by one of Giovanni’s visits, in their kitchen. Brad suggested she casually read through them, but Angie tossed them in the trash and furiously told Brad she didn’t want any of ‘that kind’ of material in their home.”

Brad Pitt first sipped from the Scientology pot back when he dated Juliette Lewis. A website, The Truth About Scientology, claims Brad completed a couple of Scientology classes in the early 90s at the Celebrity Centre in ‘Hell- A’ (Los Angeles). One course was “Therapeutic TRs” for drug addiction, the other was “Special Course in Human Evaluation.” Pitt later filmed Interview With a Vampire with Tom Cruise, so the seed definitely has been planted. “The church is always looking for more high-profile stars to join the faith.”

Katie Holmes and Leah Remini pissed on the Scientology church with their public disapproval. John Travolta’s gay bathhouse scandal added another booger to their silk napkins. It’s like a secret society, and it’s too creepy for regular people to digest.

The source continued, “That’s why Angie is especially on edge about Brad hanging out with his Scientology pals. He’s felt a huge spiritual void in his life for quite a while, and Angie doesn’t want him being drawn in. She would prefer that her family not be involved with that religion at all- and she doesn’t want her children exposed to it.”

The couple’s togetherness has surpassed Hollywood’s expiration date, and expectations. Will religion be the straw that breaks the camel’s back? Is Brad Pitt just barking on his leash? Or, does Angelina Jolie finally get to rumble with Miss Karma? Religion is what broke TomKat, remember?