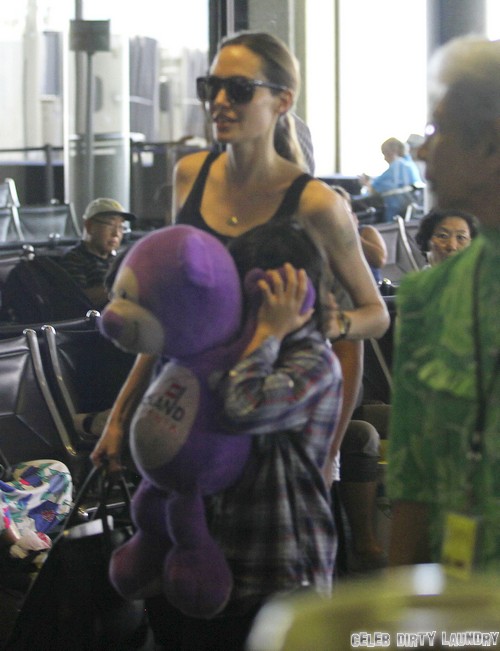 Angelina Jolie arrived in Hawaii in Sunday with two of her sons, Maddox and Pax, to prep for her new movie Unbroken. The film deals with the story of Olympian turned World War II prisoner Louis Zamperini, who is being played by Chronicle star Dane DeHaan.

Sources close to the production explain that Hawaii is being used for the majority of the scenes in the movie, adding, “Most of the Oahu locations will be on current and former military installations to stand in for U.S. bases during World War II and a Japanese POW camp. The production also will use an Oahu high school football stadium to stand in for an Olympic track stadium.”

That’s all well and good, but one thing most people forgo when discussing Unbroken is how this is Jolie’s first proper chance at a Best Director nomination. When she directed In The Land of Blood and Honey, it was intensely personal and beautifully made, but the movie was ultimately a foreign language film and too raw for the Academy. Sure, she still could have gotten a Best Director nomination – Michael Haneke got one for his foreign language Amour last year – but it would have been a long shot.

However, with Unbroken, she’s taking on a film that is pretty much classic Oscar bait. It’s based on a true story, has an established actor in the lead role, and carries the sort of winning human spirit that Oscar voters love. Add in the fact that Angelina and Brad [Pitt] will probably use their wedding as their Oscar campaign, and her double mastectomy reveal, and the nomination is looking like a sure thing – even though the film hasn’t even started shooting yet. Mark my words though – when the film does come out [which will probably be at the end of 2014, just in time for awards season], Angelina’s name and Unbroken will be prominently in the mix.