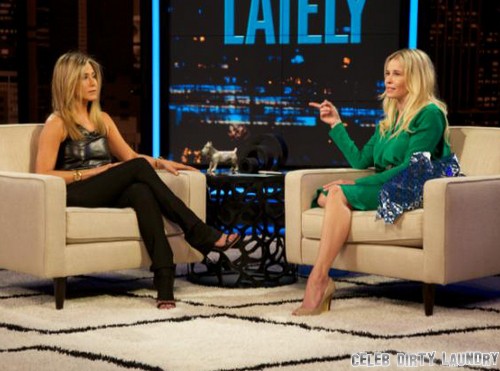 Even though it’s been years since Angelina Jolie and Brad Pitt hooked up, leaving Jennifer Aniston in the dust, the love triangle still continues. The tabloids have refused to give up on creating the illusion that Brad still has feelings for Jen, and they’ve made a fortune off the Brangelina/Jennifer Aniston stories. Now, the latest report from the National Enquirer claims that Jennifer has called for a ‘ceasefire’ in her ‘war’ against Angelina Jolie after the news of her double mastectomy came out.

The Enquirer’s source claims, “Jennifer had never been able to stop resenting Angie for cheating with [Brad Pitt], but when the astounding news of her double mastectomy broke, Jen was totally shocked. She wouldn’t wish what Angie’s gone through on anyone! And her love rival’s ordeal allowed Jen to release — finally and forever — all those hard feelings she’s been harboring.”

The source also adds, “Aniston has warned pals who’ve joined her anti-Angie rampages over the years that there’ll be NO Jolie-bashing henceforth!” According to the source, this also includes Chelsea Handler, who has made Angie-bashing one of her favorite pastimes in the past few years.

So is this true? The report does state that while Jennifer doesn’t wish to become friends with Angelina and Brad, she wishes them ‘well’. Isn’t that she always said, though? I guess it’s a completely different matter in private, but I don’t see how the news of Angelina’s double mastectomy will allow her to let go of the past. Because Angelina went through a difficult ordeal? The whole story seems off, but hey, if it’s true, good for Jennifer Aniston. It’s about time, right? Ten years is enough to put the past behind you.