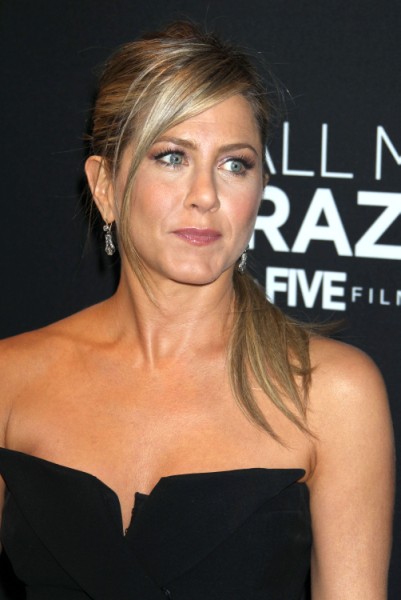 This is what we’ve all been waiting for, right? How is Jennifer Aniston reacting to Angelina Jolie’s Double Mastectomy news? Apparently she cried. Well shit. Were they tears of joy or tears of happiness? Just kidding. Jennifer Aniston would never wish cancer on anyone! I mean, I’m sure she wished horrible things on Angelina ten years ago but that’s all water under the bridge now. In fact, according to Female First magazine, this whole situation has caused Jennifer to rethink her loathing and send out an olive branch to the uber famous couple.

Apparently Jen was totally moved when she read Angelina’s New York Times piece and sent out some encouraging texts to her former husband, Brad Pitt. A couple of Jen’s close friends, Sheryl Crow and Christina Applegate, have gone through similar experiences so she knows first hand about trying to support someone in that position.

“Jen was a major rock for Sheryl, who had seven weeks of radiotherapy when a lump was found after a standard mammogram. Jen will never forget how brave she was. That’s why she knows full well what an enormously brave decision Angelina’s made,” a source told the mag.

I wonder if these text messages came before or after Brad’s Esquire magazine interview? Because if I were Jen I don’t think I would have had many nice things to say after that shit was released. If she has talked to him since then I’m assuming the conversation went something like this, “Hey Brad. Listen I’m so sorry about Angie. It’s great you guys made it through and everything sounds like it’s going well. Oh, and by the way, go f*ck yourself.”

What do you make of this Jennifer Aniston/Angelina Jolie cancer reaction story? Would Jen really reach out at this point especially after the things Brad just said?