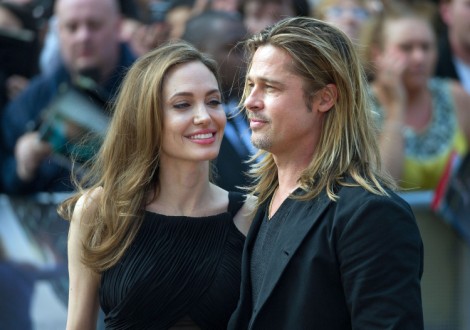 After eight years, five more kids and a couple Oscar nominations does it even matter at this point? Um… of course it does! Because the whole story from the beginning was that Brad Pitt never cheated on Jennifer Aniston. He met Angelina Jolie on the set of Mr. and Mrs. Smith but they never did anything shady until the movie ended and Brad broke it off with Jen. No one wanted Angelina to be labeled a homewrecker. It’s not like anyone really believed that version anyway but now we might have proof the co-stars were bringing their work home with them long before Brad fessed up.

Angelina Jolie’s stunt double, Eunice Huthart, is filing a lawsuit against Rupert Murdoch’s News Corporation for alleged phone tapping that occurred in 2004 and 2005. She claims the revelation that Brad and Angie were checking into hotels together as a married couple during promotions for Mr. and Mrs. Smith was found out after her voicemail was hacked. Only she, along with the superstars’ bodyguards and personal assistants knew about the relationship. Apparently she and Angelina were super tight and lived together for a time during those  years.

That all happened around April 2005. There were rumors that Brad and Angie were getting cozy on the set long before that but this  might have been the first time a tabloid ran with something close to evidence of an affair. Brad and Jennifer announced their split in January 2005 but didn’t finalize the divorce until September of that year.

So is this the undeniable proof we’ve been waiting for? Not quite. There are some missing months in there. Brad could be telling the truth. He and Angelina could have waited to hook up after he told Jen but I doubt it. People have come out and pretty much said that he was already infatuated with Angelina by the time he broke up with Jen so I’d assume he and Angelina were fooling around. Again, does it even matter at this point? Not really. It’s just interesting how hot and heavy they got so fast into their relationship. Brad was still technically married to Jen when he was off playing house and considering himself married to Angelina. It kind of sounds like a very Kim Kardashian thing to do. Yes, I just compared Brad to Kim. Deal with it.