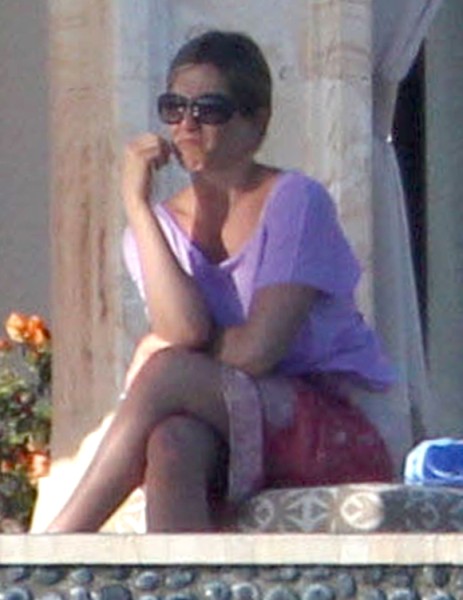 Is it the worst assumption? Is Jennifer Aniston furious? These new pics of Jennifer Aniston and Justin Theroux in Cabo seem a tad bit different than the ones earlier in the week. Where’s the bikini? Where’s the smile? Where’s the greased up abs? Could something have gone off plan perchance? Maybe it’s just the end of the vacation and Jen and Justin are bored. After long enough, I definitely get the antsy feeling to get back to real life. But Jen’s never struck me as the kind of person who got the vacation blues. Could the obvious answer be the right one for a change? Is Jennifer waiting around, annoyed, just like the rest of us, for the big news? Are the Angelina Jolie, Brad Pitt married rumors true?

What? No! Jen would never let anything as silly as gossip ruin her vacation! Shut up! Yes, she would. Because no one knows if it’s gossip. Angie and Brad are being very quiet about the whole thing and not denying a wedding took place on Christmas. Their WHOLE family was with them. It seems too obvious! And I’m sure it sounds too obvious to Jen too. Do I think Jen’s jealous of the wedding? Not really although maybe there’s some emotions playing. She’s probably more annoyed that the couple stole her idea. I still think Jen and Justin wanted to get married over the holidays but pulled it when they heard about Brad and Angie. It’s just such an Aniston thing to do. Getting married on the beach at sunset is her thing just like saving orphans is Angie’s! Damn Angelina for stealing Jen’s man and her wedding theme!

But… I’ve been wrong before. This could all be nothing. Jen might just be having a bad day. Maybe her guests overstayed their welcome. Maybe Justin was acting douchey. Who knows? I’m just saying… what a difference a day makes.