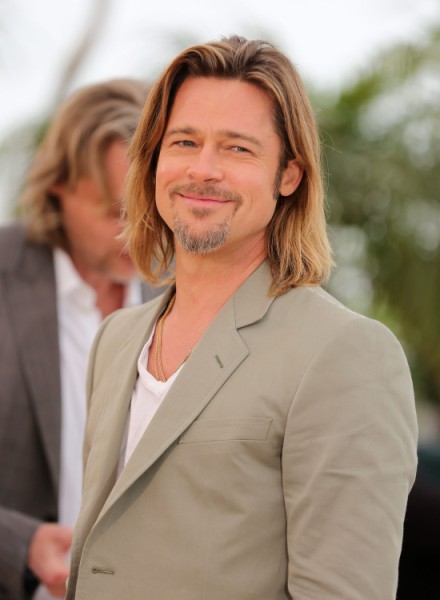 Brad Pitt’s sexy Chanel ads hit the internet yesterday. Everyone has an opinion on them. Personally I have no idea what’s going on or why he’s talking to a door but I’m usually in the dark with Chanel commercials.  Is Brad Pitt’s famous mug still doable? Does he make you want to run out and spray overpriced shit all over your body? Survey says – I’d hit that and I’m sure a lot of you out there would too. I’m a huge fan of the world traveled, crow’s feet Brad. Ten years ago he was much too pretty. He’s aging and I’m liking it. He’s not aging as well as George Clooney but is doing it much better than Leonardo DiCaprio.

Apparently Brad got paid $7 million to look at a door and read three meaningless lines. Bring on another kid! But enough with all of this. I don’t care about the Brad Pitt/Chanel ad. What I care about is why Jennifer Aniston decided to flash her mammoth ring the same day Brad’s ad surfaced. Conspiracy or coincidence?

Lainey Gossip brought this to my attention yesterday. Why Jennifer?! Why!? Jennifer Ansiton is either the craziest woman in the world or she just has really really bad timing. She’s been engaged for months now! Why drop on that particular day? Or was it the other way around? Did Angelina Jolie and Brad know Jen was going to launch her engagement ring pics so they decided to strong arm Chanel into floating the commercial pics to show Jen what she’s been missing? I totally made that up. Is that even possible? Would people who seemingly have nothing to do with one another play that game? I probably would but I’m shallow that way. But isn’t Angelina too busy saving the world to care if Jennifer’s ring is bigger than hers? Have you seen the pics? It could very well be bigger. It’s HUGE!

I don’t know the answers to any of these questions. I’m just thinking out loud. I do think the two camps need to start collaborating with each other better. Did Brad and Jennifer have to get engaged to other people in the same year? Do they have to get remarried the same year? I’m just saying… let’s spread the love. So what do you think of the ads? Should Jennifer still feel bitter or did she get the hotter version of Brad? Bitches please, everyone knows my girl Gwyneth Paltrow got the hottest Brad. We’re talking 1994 Legends of the Fall Brad Pitt because that’s how my GP rolls. Tristan forever!

Anyway, check out the ad below. Hot or not? Also, conspiracy or coincidence on Jennifer Aniston’s engagement ring pics?