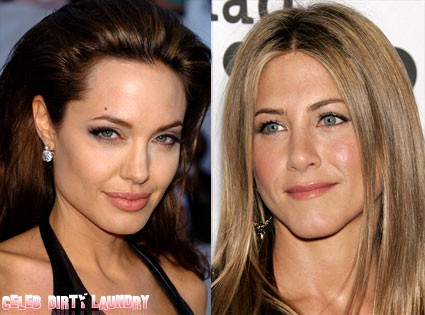 Could the Jennifer Aniston – Angelina Jolie seven year stand off finally be coming to an end? Is Team Aniston ready to make nice with Team Jolie? There are signs the frosty relationship between Brad Pitt‘s ex and the woman who stole him away is thawing…and it’s Jen making the first move.

The Wanderlust star has sent Ange a bunch of flowers. We’re not talking dead roses with the heads cut off – I mean a beautiful bouquet! She also included a note congratulating the mother of six on her directorial debut In The Land Of Blood And Honey. She thought Ange’s work on the movie was pretty impressive and wanted to let her know. The 42 year old is not quite ready to pick up the phone and speak to her former love rival …but she managed a delivery of fresh flowers and some hand written well wishes. That is a major step forward!

So why is Jen suddenly extending the olive branch? Two words – Justin Theroux. An insider has told Now magazine ‘Jen’s so happy she thinks all her past heartbreak might have been worth it for her to have what she does now‘ So maybe the former Friends star’s intentions are honorable after all. No Snow White and the poison apple here.

Jen deserves a bit of happiness. After her marriage to Brad collapsed her self esteem hit an all time low and she sought solace under the knife. Celeb Dirty Laundry covered it here Jennifer Aniston Finally Admits To Having Plastic Surgery Angelina may have nabbed the one time Sexiest Man Alive but she’s also had a rocky few years with co stars proving too tempting on occasion Angelina Jolie Slept With Johnny Depp While Making The Tourist But maybe the tide is turning for these two…