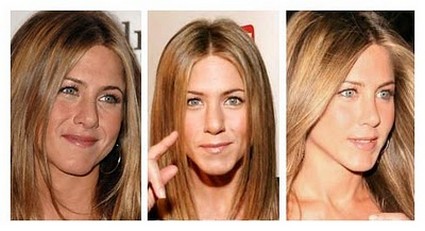 Jennifer Aniston has finally admitted on Conan O’Brien that she has had cosmetic surgery. We always knew that Jennifer Aniston has had tons of cosmetic/plastic surgery, including two nose jobs, but the celeb always denied it and pretended she was a ‘natural’ beauty. In fact pics show that prior to her nose jobs she looked like Barbara Streisand – but of course she can’t sing. Jennifer admitted to Conan that she had an intense laser peel which burned off the surface of her face. Conan noticed Jenn’s smooth complexion, and after complementing her on it learned the truth – it wasn’t natural!

Radar Online Reports on Jennifer’s TV interview:  Jennifer Aniston, appearing on Conan O’ Brien Wednesday to spread the word about her new flick Wanderlust, opened up about getting her star on the Hollywood Walk of Fame and her fascination with skin care treatments, and we’ve got all the details for you.

Aniston said, “I did this thing called like, a peel. It’s extremely intense — you don’t realize you look like a battered burn victim for a week — and then [the dead skin on your face] just kind of falls off … for eight days.  “It was horrifying.”

“I hope you saved the face afterward,” Conan joked. “That is eBay gold!”

Plastic Surgery Before And After has details about Jenn’s nose jobs:

“The Break-Up” and “Friends” star reportedly had the Plastic Surgery”. And she not only has one but two Nose Jobs. Rumors claims that she went under the knife 12 years ago and was not satisfied with the results. So she again went for another Rhinoplasty(Nose Jobs).

On January 20, 2008, the actress was speckled leaving a plastic surgeon’s clinic but the actress denied the rumors and said that, she has gone to correct the incorrectly repaired deviated septum. After the deviated septum repair, Aniston’s nose tip appears to be much defined and her bridge has become narrower.

Now we need Jennifer to own up to her breast implants. Perhaps fear of exposing the procedures she had to augment her breasts help explain why she is reluctant to reveal her boobs in her films. We know that it certainly isn’t modesty!