Jennifer Aniston Getting Married At Julia Roberts’ House, What Does Brad Pitt Think About That? 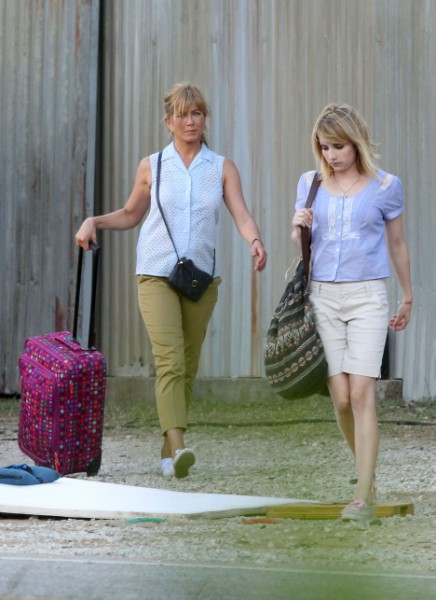 Everyone sort of pegged Jennifer Aniston as a destination Mexico wedding sort of gal but news is that she has her sights set on New Mexico instead. And this isn’t any ordinary venue. Jen’s all about getting married at Julia Robert’s house. But can Julia say yes? Isn’t this a conflict of interest between friends?

We’ve all been there. When you break up, you have to pick and choose which friends come with you. I always figured Julia went with Brad Pitt. They’ve been in four movies together and have always seemed pretty. Jen was involved in that friendship when she and Brad were together. There are tons of photos of everyone partying at Lake Como with George Clooney and the other Oceans 11 people. But when Brad and Jen divorced, she moved on from that crowd. Usually Jen kicks it with Sheryl Crow, Courtney Cox and Angelina Jolie basher Chelsea Handler for girls’ trips to Mexico. I’ve never once heard of Julia joining that crowd. Julia doesn’t seem like much of a joiner, right?

Well, she didn’t volunteer her house for the wedding either. Rather, Now magazine reports that Julia’s niece, Emma Roberts, brought up the idea to Jen while on the set of their new movie, We’re the Millers. “Julia’s gorgeous estate in New Mexico is the type of setting Jen wants. She’s crazy about the place,” a source tells a US magazine (via Now). “[Emma] has offered to give Jen a tour of her auntie’s ranch to see which vista would provide the best place for a tent, and which giant old Chilean mesquite tree would provide the best backdrop.”

I bet Auntie Julia bitch slaps Emma when no one’s watching because you know she doesn’t want to get involved in this right? It’s weird on all levels. Jennifer Aniston can get married anywhere she wants at any cost so why would she choose the estate of one of her ex-husband’s best friends? It’s just too close for comfort and I can’t believe Jen would consider it nor that Julia would offer. Wouldn’t it bring up too many memories of fun times in your past life? Why have those memories floating around when you’re beginning a new life? I’m calling bullsh-t on this. I do believe Emma would offer something that wasn’t hers to offer, especially something this inappropriate but I doubt Jennifer would take her up on it. She already stole Brad’s mom as a bridesmaid, she can’t steal his best friend’s house for a venue too!

Do you believe Jennifer Aniston’s getting married at Auntie Julia’s?